“When you take psilocybin, it’s like taking onboard your own psychotherapist.” said a study participant about his psychedelic experience.1 A widespread belief about psychedelic drugs is that they can turn users mentally ill; what the data shows, however, is that psychedelics can achieve quite the opposite effect: they afford patients a relief of symptoms. Indeed, a growing body of evidence supports that psychedelic drugs may be extraordinarily effective in treating mood disorder and addiction. 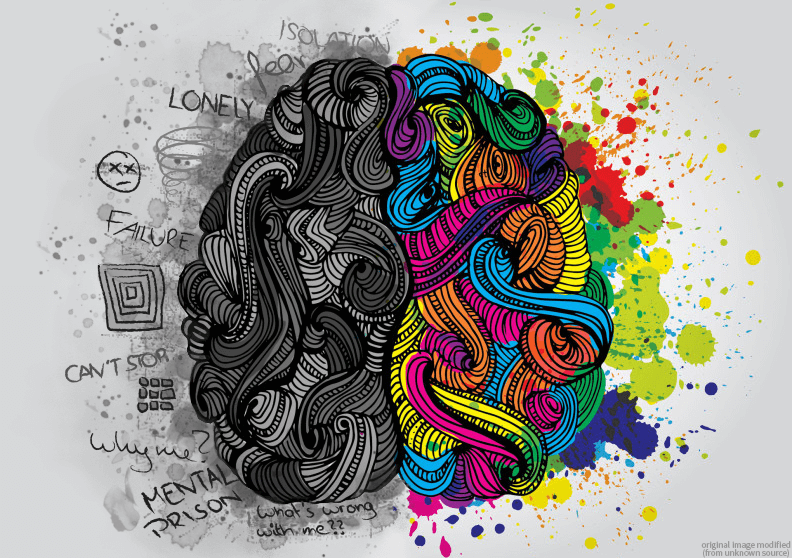 Depression. Anxiety. Addiction. Most everyone of us knows somebody who is battling such a condition. Talk therapies may help, but sometimes they don’t. Antidepressants may help, but sometimes they don’t. Some patients are of the opinion that antidepressants are like “Band-Aids” in the way that they never really tackle the underlying issues of their problems.1

I haven’t yet heard psychedelics getting described as “Band-Aids”. What I have heard from users is that psychedelics do something like the opposite: they confront you with your greatest vulnerabilities and help you come to peace with them.

“We’re looking at a new paradigm for the way these [mental disorders] can be treated”2 says pharmacologist Dr. David Nichols, president and co-founder of the Heffter Research Institute. In this post we’ll look at the latest results from psychedelic research and how they may revolutionize our approach to mental health.

Recent studies have found psychedelics to reduce symptoms of anxiety,3 4 depression,5 4 6 and obsessive-compulsive disorder7 as well as addiction.8 9 The effects often lasted for several months after just one or two exposures to the drug.5

The results of these recent studies are frankly mind-blowing. I’d like to present to you three of them, all carried out by reputable research teams across the U.S. and Europe.

The World Health Organization estimates that more than 300 million people suffer from depression.10 Antidepressants and psychotherapy can offer some relief, but 20 percent of patients are treatment-resistant, meaning they don’t respond to any intervention whatsoever.11

In a recent pilot study performed in the U.K., Dr. Carhart-Harris and his team studied the effects of psilocybin in exactly these kinds of treatment-resistant patients.5 The participants had suffered from moderate to severe depression for, on average, 18 years of their lives. All of them had previously tried psychiatric drugs and therapy or counselling, but with no success.

The chart below shows the individual depression assessments of the twelve participants. One week after the dose, 67 percent were free from depression. And three months after the dose, 42 percent remained in remission. 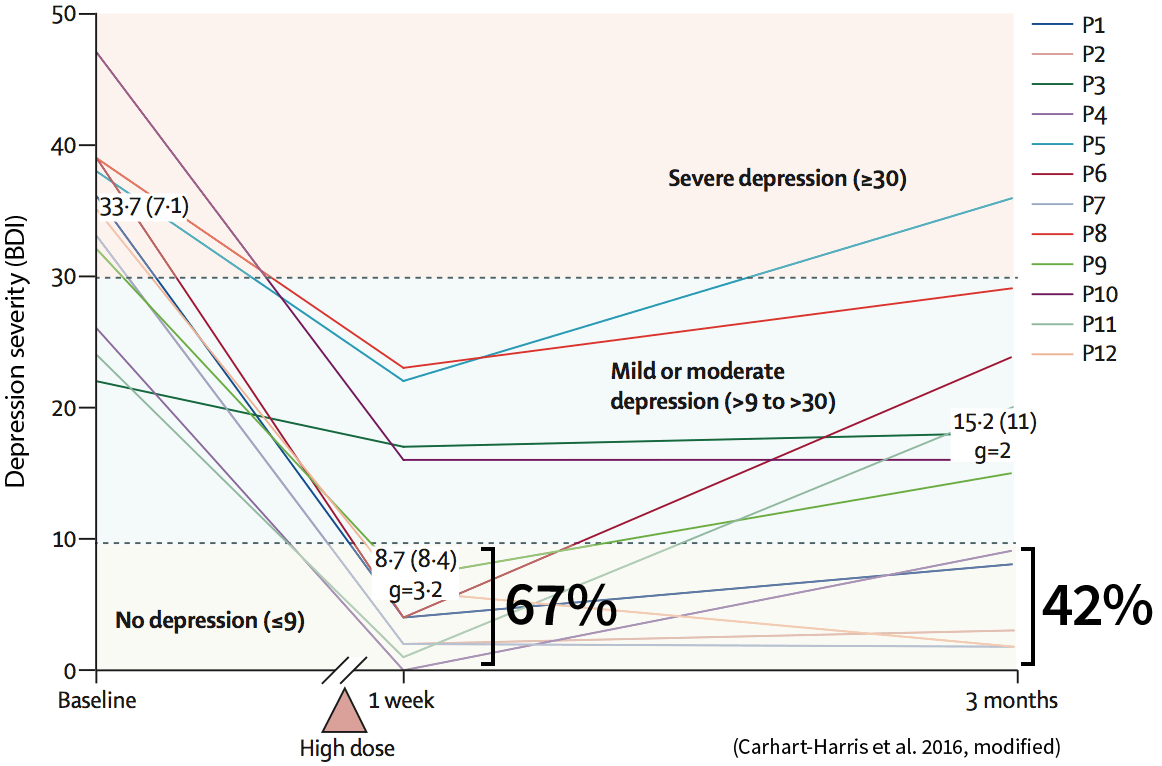 And the long-term effects? Six months after the experiment, 30 percent of the initially treatment-resistant patients remained entirely free from depression. For 75 percent, the psychedelic experience brought some degree of reduction in depressive symptoms.1

Note that this was an open-label study with a small number of participants and no control group. A lack of controls is usually a red flag and tells you that the study shouldn’t be taken at face value. In this case however, the study at hand was a pilot for larger randomized controlled trials. Research is expensive and just like engineers build a prototype before they roll out large-scale production, researchers do pilot studies before they run full-blown trials. With dramatic results like these, it’s reasonable to expect fully randomized, double-blind, placebo-controlled studies in the near future. And speaking of placebo-controlled studies…

How do you fake a trip?

So what can be done? Some researchers use active placebos. Instead of giving the participant a do-nothing pill, they’re given either a very mild dose of the tested drug or an entirely different psychoactive substance. This approach obviously comes with its own challenges, but given the limited options it might be the better bet.

How would you feel if you were diagnosed with life-threatening cancer? Not surprisingly, facing one’s own mortality can unleash strong emotions. Up to 40 percent of cancer patients develop a mood disorder which in turn interferes with their chances of recovery.12 Psychedelic drugs certainly can’t heal cancer, but it appears they can mitigate the accompanying psychological distress.

Lead researcher Roland Griffiths and his team at Johns Hopkins University School of Medicine tested this hypothesis with 51 cancer patients. One group received a high dose of psilocybin, whereas the control group received an active placebo, which in this case was a very low dose of psilocybin that had no detectable behavioral effects. In this way, all participants were told they were taking psilocybin and this controlled for expectancy. 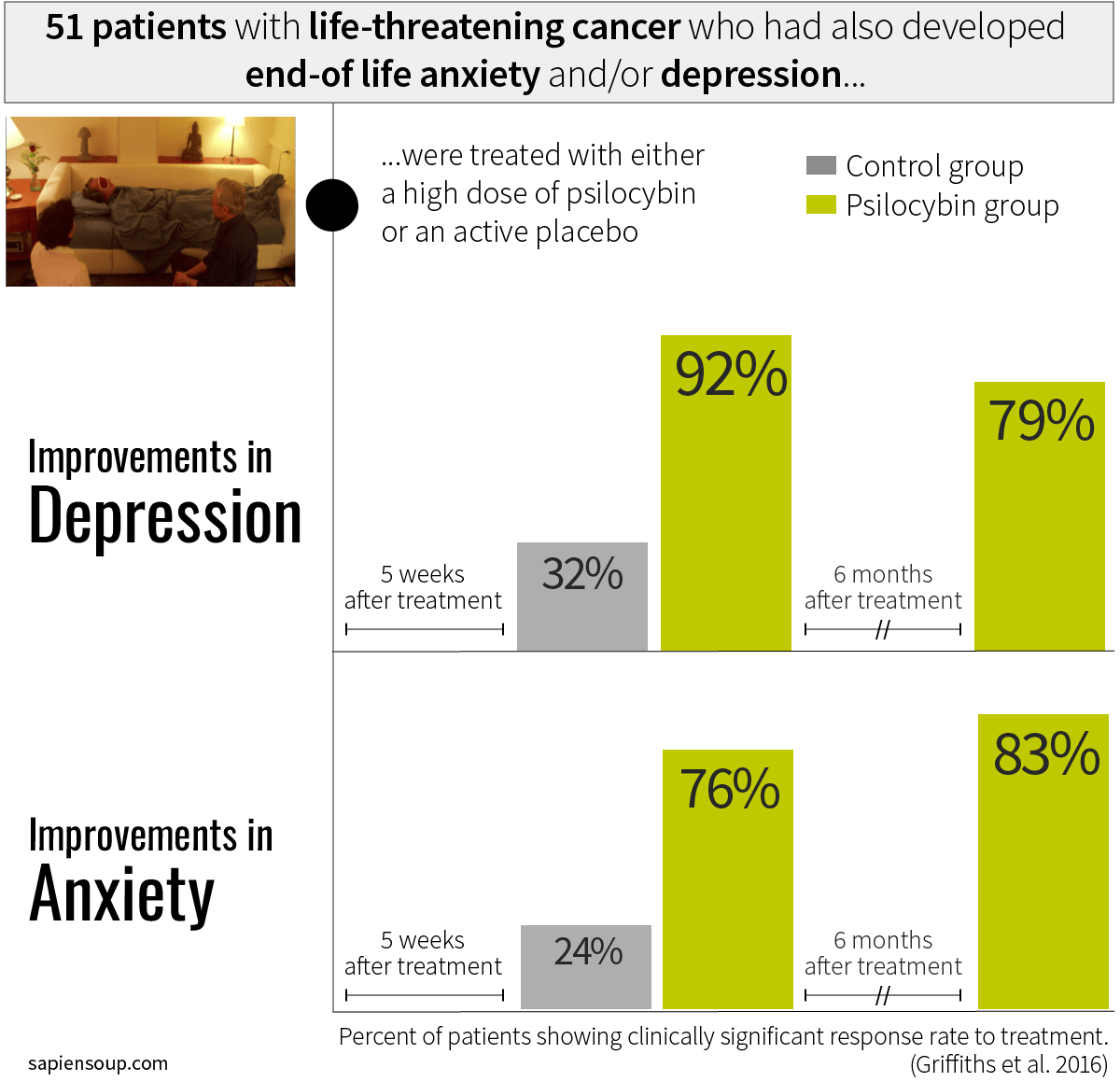 “Such a substantial and enduring effect after one dose is unprecedented in the field of psychiatry.” says Roland Griffiths, professor of neuroscience and psychiatry at Johns Hopkins.13

“Such a substantial and enduring effect after one dose is unprecedented in the field of psychiatry.”

Smoking causes almost half a million deaths in the U.S. every year and is related to annual health care expenditures of $170 billion.14 Overcoming nicotine addiction poses a real challenge to smokers. Smoking cessation programs such as the popular Quit for Life program achieve abstinence rates of only 17.2 percent at six months. If supported with medication and weekly counseling meetings, the success rate can rise to 35 percent, dependent on the medication used.15 The highest success rates were seen in programs containing extensive cognitive-behavioral therapy, plus pharmaceuticals, plus nicotine replacements. Such comprehensive programs show abstinence rates of 45 to 59 percent at six months.16 17

Matthew Johnson, expert in drug dependence at Johns Hopkins, wanted to see if psilocybin could help smokers to quit their addiction. In an open-label pilot study, 15 nicotine-dependent smokers were guided through a 15-week smoking cessation protocol which provided high levels of psychological support, but no pharmaceuticals or nicotine replacements. The participants had smoked on average 19 cigarettes per day for 31 years and had attempted to quit smoking six times before. After the program, which included up to three psilocybin sessions, 80 percent of the participants were smoke free at the six-month mark.8

The numbers produced by these three studies are impressive to say the least. Equally impressive is hearing what the participants have to say about these treatment experiences.

Recall the treatment-resistant depression study from above. Six months after the single psilocybin session, the research team followed up with the participants and interviewed them about their session experience and their life ever since.1

“It was like the light switch being turned on in a dark house.”

Almost half of participants reported major lifestyle changes during the months following the psilocybin session. Frequent changes involved improvements to diet, exercise, and cutting down on drinking alcohol. “I lost a lot of weight just purely because I didn’t want to eat badly and that went on for some months. I couldn’t eat what I knew wasn’t good for me.” Some changed their social circles, went out more, got new jobs, learned to drive, built a new kitchen, volunteered with refugees, travelled or picked up acting, comedy or dance classes.

Across all the stories, researchers identified two major themes of inner change. First, a change from disconnection to connection and second, a change from emotional avoidance to acceptance.

Depression can feel as if you’re in a “mental prison” where you’ve gotten stuck in your thoughts. It “robs you of your confidence in yourself” and makes you increasingly less able to engage with your environment. The result is isolation, and whether it’s a perceived or actual isolation, depression is a lonely condition.

About the time following the psilocybin session, participants reported how they “had the mental agility to overcome problems”. They noticed a boost in self-worth, how they were able to adopt fresh perspectives and how they rekindled previous interests. “[My wife and I] went for dinner for the first time in 6 years: we were like a couple of teenagers.” told one participant. Another shared “I went past a bike shop and went in off the street and said ‘can I hang out and help out?’ I went there for 6 months and helped renovate his shop.”

Some described it as reconnecting to “who they had been” before the depression had developed. Their self-perception changed. Nearly half of the group described realizations of “being a good person” and feelings of self-compassion and self-worth. They felt not only more connected to their surrounding but also more connected to themselves.

Boys don’t cry. A common root of depression is the inability or unwillingness to deal with certain emotions. “My whole life I’ve self-medicated to try to make emotions more bearable, sometimes with food, cigarettes, painkillers.”

One participant saw “emotions as weakness” because he had been raised in an environment where he learned to “put his feelings in a box because you can’t be upset, you’re a man”. Others had gone through traumatic events in their past. Regardless the origin, when participants came face-to-face with their emotions during the psilocybin sessions—which happened regularly—it triggered intense yet cathartic experiences. Powerful bouts of sobbing were observed throughout the sessions, which participants later described as “purification”.

After the session, participants noticed a fresh openness to experiencing emotions, a change that was often long-lasting. One participant described it as “a rebooting of the mind”, another noting that “it reconfigures you somehow.”

All participants said they preferred psilocybin over conventional treatments. To many of them, antidepressants and talk therapies seemed as if they were reinforcing disconnection and emotional avoidance. Some participants explained that their past therapists were trying to motivate them from the ‘outside’. Psilocybin, however, helped them to access an ‘inner voice’ which they said felt immensely powerful and highly motivating. “It’s almost as if when you take the capsules it’s like taking onboard your own psychotherapist.” With psilocybin, they had an empowered experience of self-reflection, which previous therapy attempts did not provide.

Rosalind Watts, the lead researcher of this study, proposes that with psilocybin “patients and clinicians may be granted a broader palette of treatment options in the future, affording them an opportunity to select a treatment that best suits the specific needs and/or desires of a given patient.”

“Patients and clinicians may be granted a broader palette of treatment options in the future.

A new approach to mental health

In a nutshell: do psychedelics alone cure mental disorders? No. Rather, psychedelics may serve as a catalyst for patients adopting new perspectives and making important lifestyle changes. Hence, kicking off a treatment protocol with strategically planned dosing session may substantially increase the overall effectiveness of the treatment.1

Given the growing body of evidence supporting the safety and efficacy of psychedelic drugs, I believe it’s a matter of time until jurisdictions around the globe will approve psychedelics for medical use. Organizations like MAPS, Beckley Foundation and Heffter Research Institute play a key role in advancing psychedelic research and driving drug-policy reforms in a peaceful and sensible manner.

In the meantime, a phenomenon called microdosing has become popular in Silicon Valley and beyond. Our next post will take a closer look at microdosing LSD for the purpose of enhancing cognitive performance. You can sign up for our newsletter and get notified when we publish it.

If you are located in the Vienna area, we invite you to join the Psychedelic Society Vienna Meetup, where we’ll discuss the latest research and developments in the field.