“Psychedelic drugs are poised to be the next major breakthrough in mental health care” writes Scientific American.1 Dropping acid to treat depression—seriously…?! 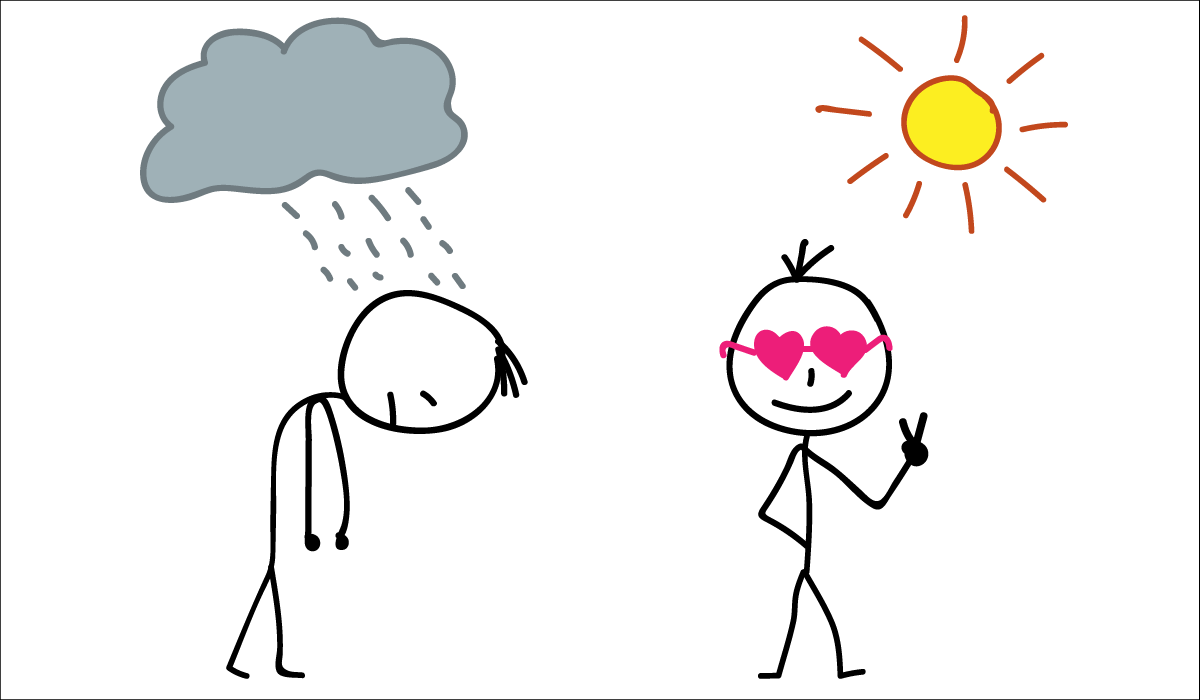 Psychedelic drugs can seem pretty scary at first. At some point in your life, you’ve probably heard stories about LSD causing schizophrenia, triggering flashbacks, or even making people jump out of windows because they think they can fly.

Some of these stories contain a kernel of truth, while others are simply urban legends. I’ll go into detail about these concerns in later posts—including what the latest scientific research tells us about them.

But for now, try to set aside any horror stories you may have heard. A large and growing body of evidence supports that psychedelic drugs have an acceptable risk-benefit ratio and are worth a closer look.

Mental disorders are doubly destructive: first in the suffering they cause for the afflicted, second in how expensive and time-consuming they are to treat. New research is demonstrating that certain psychedelic drugs are extraordinarily effective in treating mental health issues like depression, post-traumatic stress disorder (PTSD) and addiction.

The benefits for individual patients are dramatic on their own, but equally compelling are the economic effects of lowering the costs of treating these illnesses. When patients get faster and more effective relief, health care systems and their taxpayers do too.

Here are a few quick facts that give a sense of just how big—and expensive—a problem we’re dealing with:

Currently, patients are being prescribed expensive drugs and are going through years of psychotherapy. But how much does that actually help? Take depression for example: patients must take their medication on a daily basis, it takes at minimum two weeks before the pills are effective and they come with serious, undesirable side effects. Meanwhile, they are only slightly more effective than a placebo pill.9 I’d shop for a better deal.

Antidepressants are expensive, but barely more effective than a placebo pill.

Purposefully used, psychedelic drugs could relieve pressure on our health care systems and thus on taxpayers. More importantly, it could help millions of people who are stuck with mental disorders move on with their lives.

This is the first in a series of blog posts, where I will investigate the medical benefits of psychedelic drugs, namely LSD (aka acid), psilocybin (aka magic mushrooms), MDMA (aka ecstasy) and ketamine.

Psychedelic drugs are heavily stigmatized. In most countries they are subject to the most restrictive drug laws. Governments consider them to have (1) a high potential for abuse and (2) no currently accepted medical applications. Those assumptions have been proven wrong by countless studies. But drug legislation hasn’t caught up with the facts yet. Consequently, medical use of psychedelic drugs remains illegal.

In 2010 David Nutt, Ph.D., former president of the European College of Neuropsychopharmacology and advisor to the British government on the misuse of drugs, presented a rational analysis of the 20 most popular illegal drugs. He analyzed the individual and social harm of the drugs. 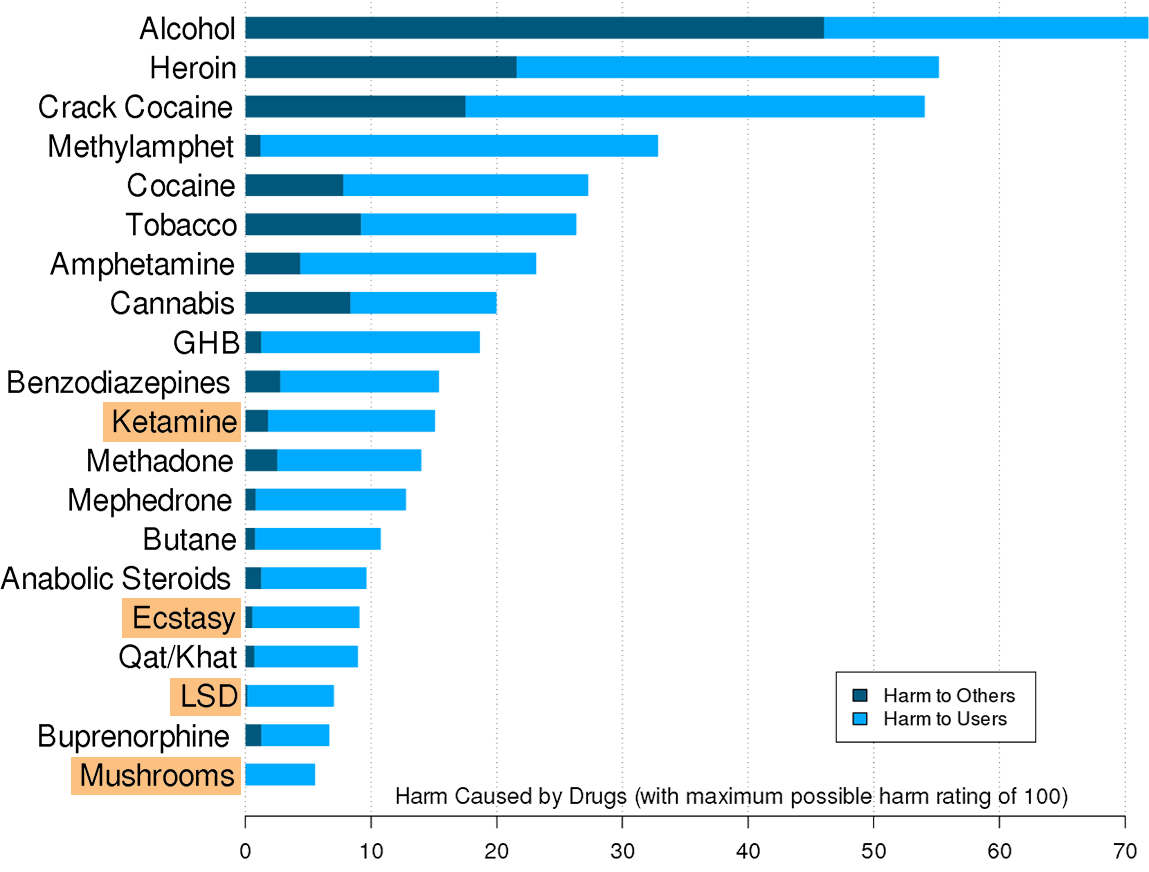 Besides the more obvious, immediate physical harm to the user (in light blue) every drug implies a certain degree of social harm (in dark blue), such as damage to families or cost of health care and police. Nutt found that heroin, crack cocaine and methamphetamine (aka crystal meth) were most damaging to the user. Alcohol was the most damaging to others because it causes loss of relationships and tangibles, injuries to others (including fights, domestic violence, traffic accidents) and economic costs. Put bluntly: society pays the price of addiction.

Psychedelic drugs (highlighted in yellow) scored very low on the overall ranking (no. 11, 17, 18 and 20) and imposed practically no damage to others.

Drug addiction is a serious problem. It’s important to note however, that the legal status of a drug does not necessarily correlate with its potential for abuse. Cannabis, for example, is still a Schedule 1 drug in the U.S. but its physical addiction potential is comparably low. Furthermore—due to its extremely low toxicity—deaths from overdosing cannabis are unheard of.

Examples to the contrary are commonly prescribed opioids. Legal narcotic drugs like oxycodone (e.g. OxyContin) or fentanyl, which is 50 times more potent than morphine11, possess highly addictive and toxic properties. Opioid abuse is skyrocketing in the U.S.. More Americans die from overdosing a prescription pain reliever than overdosing from heroin.5 Opioid prescription drugs would be located in the top right corner on the chart below despite being classified only as a Schedule 2 drug: high potential for abuse but with accepted medical use. 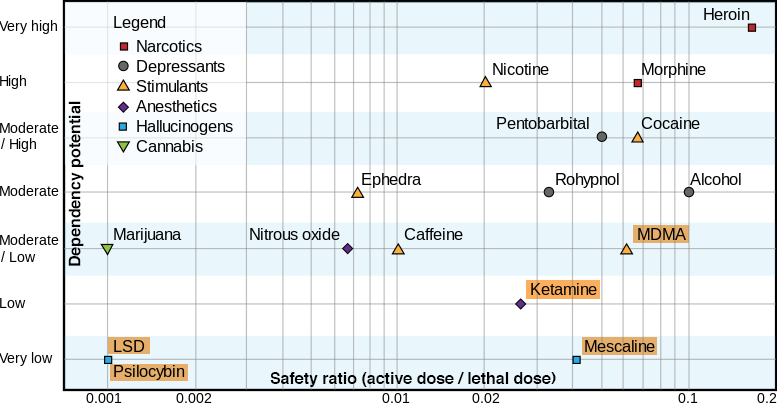 Closely timed, repeated intake of psychedelic substances do not produce satisfying effects in the user. Therefore the potential for abuse is limited. It’s widely understood that psychedelic drugs do not lead to physical addiction. In fact, studies have shown that they might facilitate coming off an alcohol or nicotine addiction.13

Many glowing results of early psychedelic research during the 1950s and 60s were a consequence of overzealous researchers reporting what they wanted to see. The research was poorly conducted and lacked patient follow-up for documenting long-term results. Many of the miraculous results could not be reproduced when proper scientific controls were in place.14

Science has changed a lot over the past 70 years and most of the early psychedelic research does not meet the rigorous standards of scientific research today.

And while all of that remains true, you don’t want to throw out the baby with the bath water. Recent studies with rigorously applied scientific standards have shown promising therapeutic effects in patients suffering from all kinds of psychological disorders.

Psychedelics might not be a miraculous cure on their own. But combined with—for example—psychotherapy we might look at a treatment protocol which is far more effective than the (expensive) status quo.

Hypothetical example of a treatment protocol

Who is driving research on psychedelic drugs?

Psychedelic drugs were declared illegal by the mid 1960s and thus early psychedelic research came to a standstill. For more than four decades, it was virtually impossible to conduct further research. Over the last 15 years however, research on psychedelics has experienced a renaissance.

Prestigious research teams across the world run fully randomized, double-blind, placebo controlled trials—the gold standard of modern research—to explore the therapeutic properties of psychedelic drugs. And reputable science journals and newspapers like The New York Times, The Washington Post, The Guardian or Wired publish the findings. Why? Because the results are literally mind-altering. 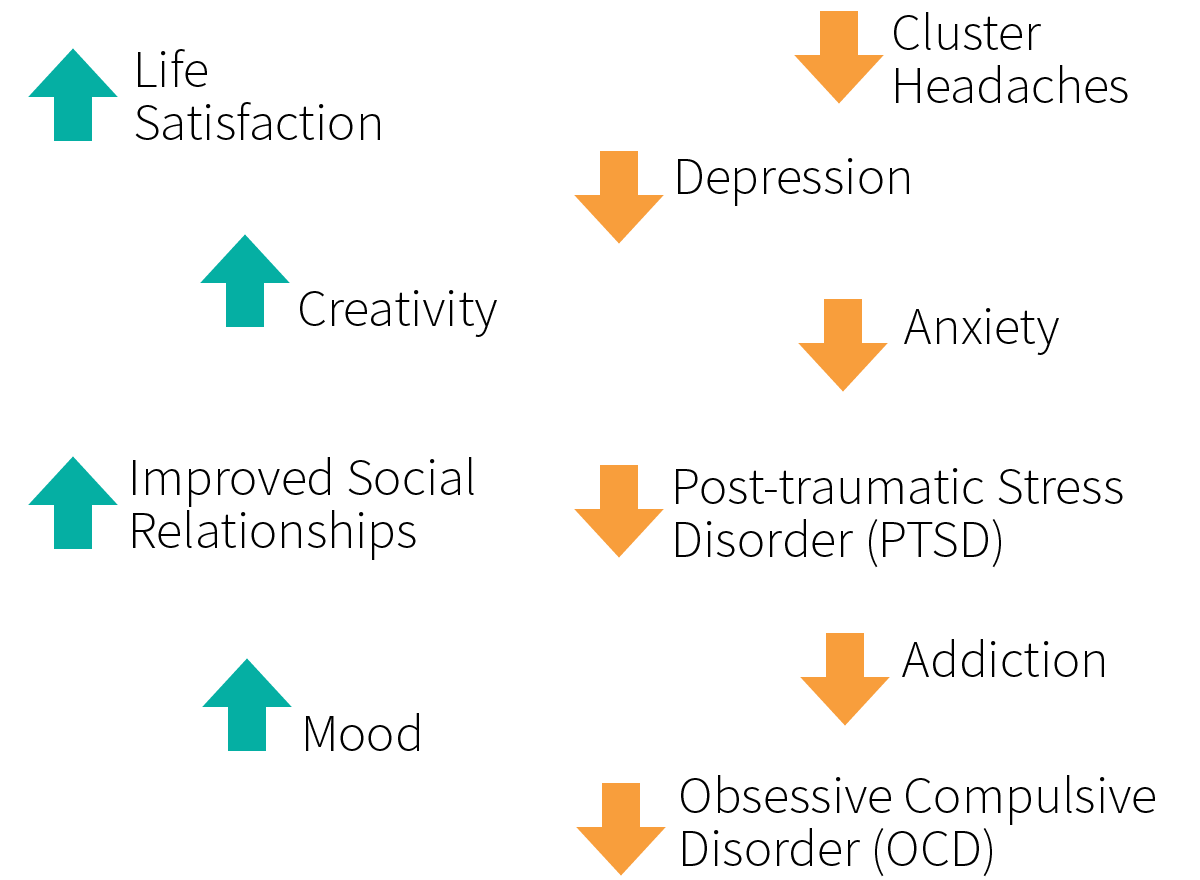 The organizations gathering these findings are amongst the most prestigious in the world:

Researchers at Johns Hopkins University School of Medicine have found that a single high dose of psilocybin decreased depression and anxiety in 92 percent of patients with life-threatening cancer.15 In another study, psilocybin helped smokers overcome their nicotine addiction. At six months 80 percent were still abstinent. Compare that to an otherwise typical success rate of 15 to 30 percent.13

A research group from Imperial College London looked at patients who suffered from treatment-resistant depression and found that only two doses of psilocybin could stop or decrease their symptoms of depression for months.16

The Multidisciplinary Association for Psychedelic Studies (MAPS) achieved groundbreaking results applying MDMA-assisted therapy to patients suffering from treatment-resistant PTSD. After only three sessions of MDMA, 61 percent of patients no longer met the criteria for PTSD. And the benefits even increased over time. 8

Scientists present their studies on psychedelics at TED conferences. New York Times bestselling authors are writing about a revolution in states of consciousness.17 Silicon Valley connoisseur Tim Ferriss states “The billionaires I know, almost without exception, use hallucinogens on a regular basis.”18 And the rest of the valley follows: microdosing LSD is trending for its alleged performance-enhancing and problem-solving properties. The stigma on psychedelics is eroding in front of our eyes.

The stigma on psychedelic drugs is eroding in front of our eyes.

Who is not driving research? —Big pharma. Drugs which are administered only once or twice are not good for business. Therefore, research is driven predominantly by universities and nonprofit organizations.

Throughout the coming chapters, I’ll share some of the most fascinating insights from current research: What exactly does LSD do to the brain? Why does ketamine lead to instant relief from depression? How does MDMA conquer fear in traumatized patients? Why are a growing number of technologists in Silicon Valley microdosing LSD? Does LSD really trigger psychoses and so-called flashbacks?

And for those of you who wonder “How does it actually feel taking a psychedelic drug?” —science has an answer for you too.

That’s a lot of ground to cover, and that’s why this is the first in a series of blog posts:

You can sign up and get notified when we publish our next story.

If you are located in the Vienna area, we invite you to join the Psychedelic Society Vienna meetup, where we’ll discuss the latest research and developments in the field.