How much THC makes it into breast milk? Can it get a baby “high”? What are the long-term effects on the child?

Update: also check out our latest post on this topic: Only small amounts of THC transfer into breast milk, that includes most recent scientific findings from April, 2018. 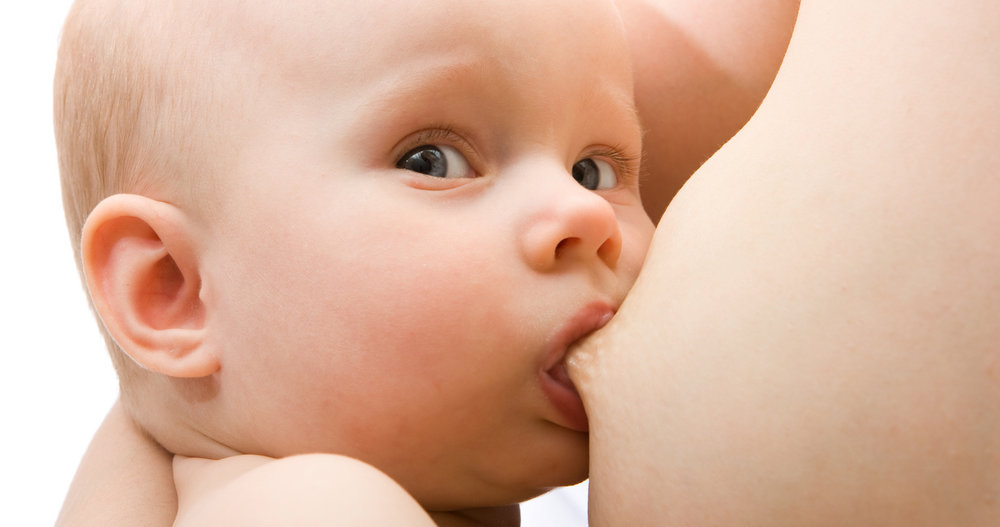 I nursed my daughter for almost two years. You bet, I had a glass of wine from time to time. I knew how long it would take my body to clear the alcohol so that—after a couple of hours—I could feed again without exposing my child to any risk. But with cannabis, nursing mothers are pretty much groping in the dark.

With cannabis, nursing mothers are pretty much groping in the dark.

Marijuana is legal in half of the States in the US and legal-ish in 16 other countries around the world. And mothers out there are wondering under which circumstances medical or recreational cannabis use is safe while breastfeeding.

The official guideline is that breastfeeding women should not use cannabis. This is because not enough is known about the topic to state “safe amounts” to mothers. I wasn’t satisfied with that answer, so I kept on digging. Here, I’ll present an overview of the scientific facts, so that you can make up your own mind.

Let’s break the topic down into two questions:

I. How much THC makes it into breast milk?
II. What are the effects on the child?

I recommend reading my post on the Human Metabolism of THC. Knowing about how THC—the main active ingredient in cannabis—is metabolized will increase your understanding of the topic. For those in a hurry: at minimum check the infographic and use it as a cheat sheet.

We will deal with very small numbers. A quick refresher on the notation and conversion of grams, milligrams and nanograms:

I. How much THC makes it into breast milk?

“It is generally accepted that all medications transfer into human milk to some degree, although it is almost always quite low. Only rarely does the amount transferred into milk produce clinically relevant doses in the infant.” reads the introduction to the reference book Medication and Mothers’ Milk.1 It is widely used in American hospitals to determine contraindications of drugs for breastfeeding mothers. The chapter on THC is short and doesn’t contain original research. Yet. 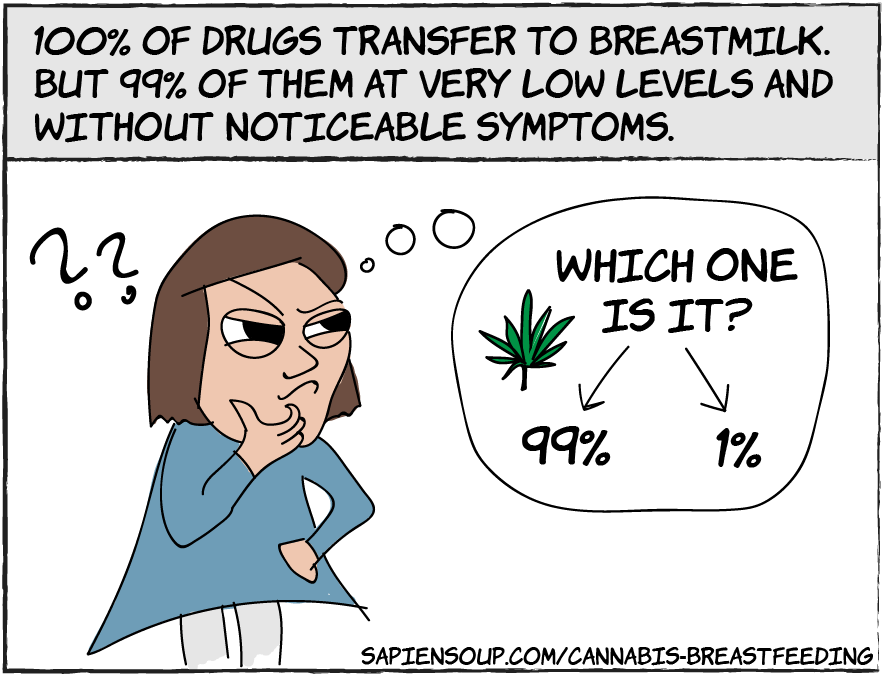 There is little data published on THC levels in mother’s milk. Most data is from the 1970s and 80s. A study from the 70s found that in monkeys only 0.2% of the ingested THC by the mother gets into the breast milk.2

How about humans?
Hard to believe, but there is only one study (!) in which two samples (!) of human breast milk were analyzed.3 The two mothers were heavy users and their milk showed THC levels of 105ng/ml and 340ng/ml.4

Those two data points are interesting, but don’t answer the question how much THC makes it into breast milk because:

True? There is eight times more THC in breast milk than in blood?

This 8:1 ratio has spread across the internet. Beware every author who quotes that number as if it were a fact—they’ve got the story wrong. Here is what actually happened:

But one sample is not representative for a larger population, nor was it the goal of the study. The study’s goal was to find out if THC was present in human breast milk at all and if so, whether it was going to be metabolized in the child. (The answer to both questions is yes.)

The 8:1 ratio was solely an observation regarding that particular case of the heavy using mother. In my eyes, those researchers are heroes for collecting and sharing that data. But they would surely not approve people quoting that 8:1 ratio out of context.

In short: that study did not find that the THC concentration in milk is 8:1 compared to blood. This ratio was true for one case and one case only.

Here are the claims actually supported by science:

Don’t you want to know how high that baby above got from the THC infused breast milk? I was curious and did the math. Turned out, in one feeding baby experienced about 1.1 percent of what an adult would experience if he ate a weed cookie. In other words:

The baby experienced the equivalent of a space cookie’s crumb. 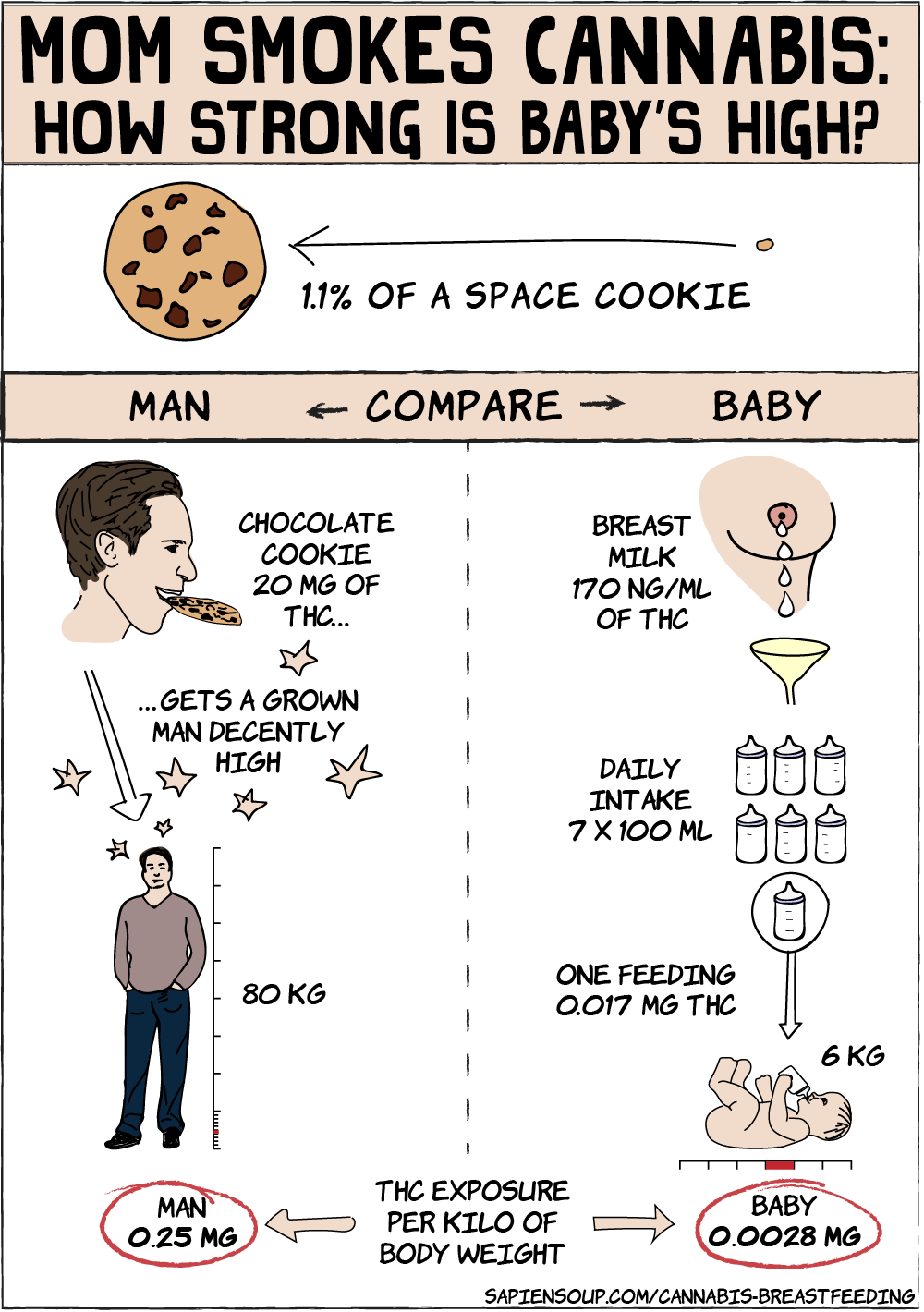 Why didn’t I compare it to the mom’s marijuana pipe? Because (1) the data doesn’t exist and (2) eating cannabis is very different to smoking it. Hence, I believe it’s a more accurate comparison if we stick to the same metabolic pathway through the stomach. From another study5 we know that 20mg of ingested THC produce a decent psychological effect in an adult man. I compared that to a 3 months old baby. The results vary according to how you set the parameters.6 Other authors came close but arrive at slightly different conclusions, e.g. Bennett who landed at a baby’s dose of 0.8 percent of the maternal intake of one joint (per feeding).7

Be that as it may—half a crumb or three—you get an idea about the magnitude we’re operating at. Keep in mind however, that a new crumb is added to the pile every time the baby feeds. The crumbs are getting smaller but we don’t know how fast. To my knowledge there is no study examining the rate of THC elimination from breast milk and that’s precisely the problem.

Not knowing how fast THC clears from breast milk is what’s keeping responsible mothers from a responsible use of cannabis.

II. What are the effects on the child?

One study8 from 1985 found no effects. The other identified slightly reduced motor development in kids of frequent users.9 That was only true if the mother consumed cannabis in the first month after birth and more frequently than 15 days per month. At one year old, those kids scored more poorly than the kids of non-users.10 However, those results can’t be distinguished from cannabis use during pregnancy; 84% of the mothers who used cannabis while breastfeeding had done so during pregnancy too.11

Ironically, the kids whose mothers used cannabis less than 15 days per month scored higher than the kids of non-users. The narrow lead wasn’t statistically significant though, which means that there was no difference between kids of occasional users and non-users. Furthermore, no differences in mental development were detected amongst any of the three groups. 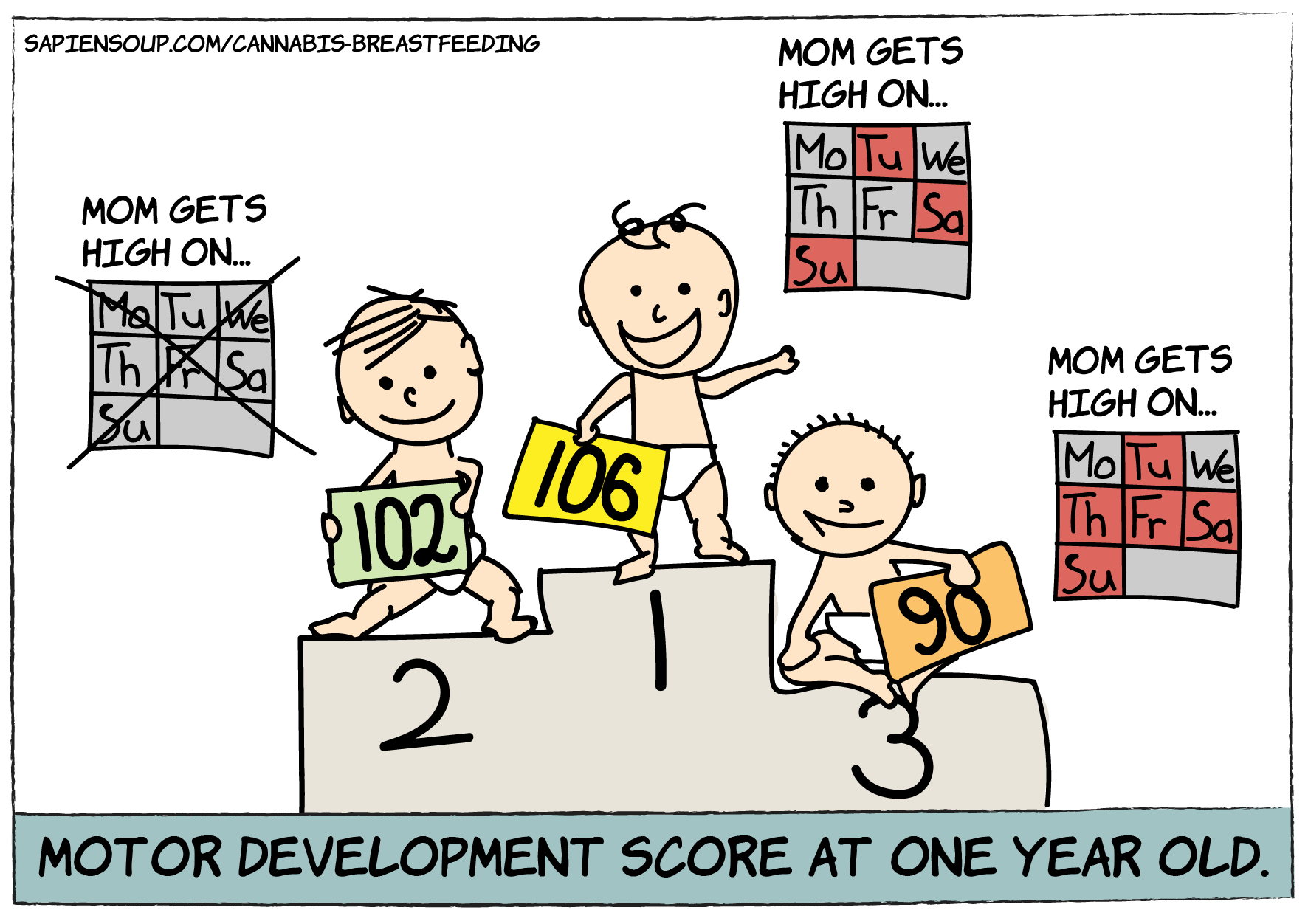 Very little amounts of THC get transferred into breast milk. Scientific publications give examples of 0.8 percent of the maternal intake of one joint per feeding7 or a total daily intake of 0.01 to 0.1 milligrams of THC through breastmilk if the mother smokes 1 or 2 cannabis cigarettes per day.12 The particular circumstances under which those numbers were gathered should be kept in mind though:

Occasional vs. regular use

The few samples analyzed all came from mothers who smoked on a daily basis. With regular use, THC accumulates in fat deposits, from where it is slowly released back into the bloodstream. That’s why the half-life of THC is longer in regular users. Recreational users show lower THC levels in blood and urine and clear it faster from their systems. How fast THC is cleared from specifically breast milk has not been researched yet.

Whether the transferred THC has adverse effects on the child is controversial. (Thin) evidence supports both sides of the argument. Heavy cannabis use in the first month of life might result in inferior motor skills at one year old. But that could also be a result of regular cannabis exposure during the preceding pregnancy.

Weighed against benefits of breastfeeding

On the other hand, the benefits of breastfeeding for mother and child are well documented: optimal nourishment, protection against infections, increased IQ, less obesity, reduced risk of ovarian and breast cancer, the list goes on.15

Traditionally, nursing mothers were advised to stop breastfeeding if they wanted to consume cannabis. In recent years, however this position has weakened. The strong health benefits of breastfeeding have led many lactation professionals towards a more moderate benefit/risk calculation.16 Especially with moderate or occasional use, evidence of detrimental effects of cannabis for the child has yet to be presented. Some doctors even go as far as to say that occasional or low regular use while breastfeeding will probably not be of relevance to the child’s development.17

My take on the topic

I believe the reasons why a nursing mother would decide to consume cannabis are personal and complex. Furthermore, I believe that most mothers care deeply for their baby and wouldn’t make such a decision lightly.

Personally, I was scared of consuming marijuana while breastfeeding and refrained from even taking an aspirin. But also, I didn’t have the information I have today. Maybe today my decision would be different.

I’m not a doctor and this isn’t medical advice. Having said that, here is what I personally found to be useful from studying scientific literature:

Backstop. Have someone sober around who can take over with the child if needed. With varying potency of product, effects can be unpredictable. Especially casual users can experience paranoia or impaired judgement. Caring for a child in such a case can be difficult.

Timing matters. During pregnancy and the first three months of life, a baby’s developing organism is most vulnerable. During that time keep exposure to a minimum.

Minimum effective dose (MED). The less, the better – true for almost anything.