Many people believe that antiperspirants cause breast cancer, especially if applied after shaving. Here is why you can happily use your antiperspirant and why you might want to throw it out anyway. 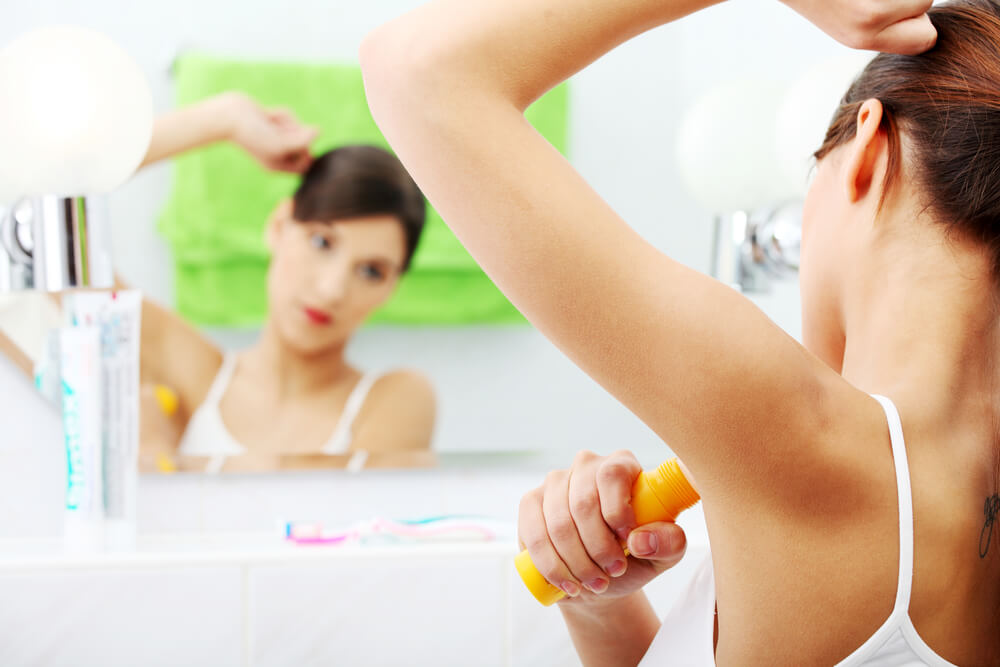 I have tried very hard to stay away from antiperspirants for the last few years because someone told me that the aluminum in them causes breast cancer. Back then, I googled this claim and found plenty of posts agreeing with this statement and thus believed it. It was pretty difficult to make the switch from antiperspirants to deodorants at the beginning, but I’ve simply gotten used to it 5 years down the line, although for eventful/stressful occasions I still bring out my very effective bottle of antiperspirant. I decided it was time to investigate sweating, deodorants and antiperspirants and whether there was any truth to this lifestyle change. Turns out, there isn’t much. But there’s a lot we should all be aware of.

Why we sweat at all

The skin is our largest organ and apart from its main role as the first line of defense in the immune response system, it regulates the body’s temperature.

Perspiration is the main way to make sure the body’s temperature stays below 40°C (104°F). Above this temperature proteins become denatured (meaning they lose their structure) leading to cell death and eventually organ failure. Our body’s temperature can be increased by many different things such as high environmental temperatures, movement or metabolic energy, emotional stress, and even by spicy food.

When sweat is released, the thermal energy is released by evaporation on the skin’s surface. Interestingly, sweating varies depending on its trigger. Thermoregulatory sweating occurs all over the body and happens in response to heat stress. Emotional sweating, on the other hand, can happen over the whole body, but tends to affect mostly the palms, soles and armpits. This kind of sweating is thought to be an evolutionary trait to prevent slipping while running or climbing in stressful situations, as it increases friction.1 Yes, moist hands have a better grip. Maybe you know the feeling of trying to open a plastic bag at the supermarket with dry hands and no success? All you have to do is wet your fingers a little bit. Same principle.

Sweating is not only very important to maintain our health, it is also one of the main reasons we look and think the way we do. The Homo sapiens sapiens, in comparison to other primates, has less body hair and the ability to produce up to 12 liters of sweat per day. We can proudly say, we are the sweatiest primates. Nina Jablonski, an anthropologist, believes that the reason we lost our body hair was that it allowed us to cool off faster, thereby giving us a distinct advantage over other primates. We can run over greater distances and hunt bigger game. Some speculate, that sweating has also been a factor in the development of larger brains.2 The function of large brains produces a lot of heat, which can only be maintained by an effective cooling system.

The downside of all this healthy sweating is that it does tend to make us smelly. It allows a whole lot of different commensal bacteria (called microbiota) to form in places with lots of sweat glands such as the armpit. The armpit is dominated by the following bacteria: Staphylococcus, Corynebacterium (considered to be the primary odor-causing bacteria), Betaproteobacteria, Clostridiales, Lactobacillus, Propionibacterium, and Streptococcus.3 These are found in the sebaceous and sweat glands, although mostly bad odor is associated with the apocrine gland, a certain kind of sweat gland.4

How deodorants and antiperspirants work

In order to control the often uncomfortable smell caused by bacteria found on our skin, the ancient Egyptians, Greeks, and Romans simply bathed often and used perfumes such as aromatic oils to cover up malodors. Up until the 19th century, Europeans used eau de cologne to mask body odors. In 1888 the first antiperspirant was made of (slightly) antibacterial zinc oxide that came in a wax-like cream form and was called MUM.5 Some other products arrived on the market in the early 20th century using aluminum chloride, such as Odorono (“Odor – Oh – No”), which had to be mixed with acid to be effective. The acidic solution irritated the skin and could damage clothing.6

Thank goodness we’ve come a long way since then. Today, there are 2 types:

People tend to worry about using aluminum because it has been shown to be able to accumulate in most tissues, such as the brain and liver. It has been associated with neurological disease due to inducing oxidative stress in neuronal cells. The problem is that aluminum is found in so many everyday substances from your drinking water, food, drugs, and of course in most antiperspirants. It is estimated that the average dietary intake ranges from 3-30 mg per day.7

The way aluminum in antiperspirants temporarily block sweat ducts, is by precipitating inside the sweat glands and producing insoluble aluminum hydroxide which plugs the glands and thereby blocks the secretion of sweat. Scientists have shown that aluminum can be absorbed via the skin as it was found in very slight levels in the blood and urine. They calculated an average of 3.6 mg of aluminum is absorbed after a one time application, although expect this to be less under normal conditions (bandages were used to detect aluminum recovered from skin). This proves that although the underarm application of antiperspirants does not increase the burden of aluminum in the body, it can be absorbed.8

Can aluminum in antiperspirants cause cancer?

But shortly after, another study was published, which concluded that more frequent use of deodorants or antiperspirants was linked with a breast cancer diagnosis at an earlier age. This study included 437 women who had all survived breast cancer and did not include a control group.10

If an experiment lacks controls, one can find statistical causal links between arbitrary activities and breast cancer.

I could, for example, choose flossing teeth, and then go on to ask breast cancer survivors when they began flossing. The data would provide me with a statistical relationship. Regrettably, this study was interpreted by many as evidence for a connection between breast cancer and deodorant/antiperspirant use. Whereas, the only meaningful conclusions we can extract from this is that women who use deodorants tend to be younger.11

However, another study in 2006 in Iraq, showed that the use of deodorants reduced the risk of breast cancer. Unfortunately, I was not able to read the actual study, but a review showed that this study and the first study with 1,606 women were the only two with proper controls in place investigating this association.

We can also dismiss another study in 2005, which suggested a link between deodorant application and breast cancer due to the increased incidence of tumors in the upper, outer quadrant of the breast.12 Some suggest, that the high proportion of breast cancer in the upper, outer quadrant of the breast is because there is more tissue in that quadrant13 14 But it has never been confirmed to be the reason for more cancers originating in this particular area. We still don’t know why this is the case.

In case you are worried about using antiperspirants or deodorants during radiation therapy for breast cancer, a study of 300 women showed that there was no difference in armpit skin reactions between the two groups.15

The answer to the question if there is any scientific proof that antiperspirants or deodorants cause cancer is clearly ‘No’.

If you want to avoid breast cancer, or any kind of cancer, some of the biggest culprits are alcohol, tobacco, obesity, sunlight, radiation and infectious agents, such as the human papilloma virus which causes cervical cancer, or hepatitis B and C which can cause liver cancer, or HIV. And of course age. But you won’t manage to avoid that. There are still more and the National Institute of Health does quite a good job of describing these in detail if you are interested.

All this data suggests we can happily go on using any kind of antiperspirant or deodorant. We do, however, need to be aware that we are changing the natural microbiota of our skin by doing so; this also counts for shampoo, soaps, body washes, and lotions.

A recent study looked at the influence of (1) antiperspirants (containing aluminum zirconium trichlorohydrex Gly as the active ingredient), (2) deodorants and (3) the use of no deodorants in a total of 18 participants. The antiperspirant changed the armpit microbiota, decreasing the percentage of Corynebacterium and making armpits more species rich. Since antiperspirants have only been in use for roughly a 100 years, we don’t know how these new species will interact with the function of beneficial skin symbionts. Just like the human gut microbiota, the skin microbiota could be seen as an antibiotic resistance reservoir. Changing its composition could have any kind of effects ranging from good to bad.3

New studies suggest a move away from the extreme clean and hygienic approach of the past, towards a more natural and sustainable kind of skin care. A new start up16 came up with an innovative approach to this problem. They developed a bacterial mist made of ammonia oxidizing bacteria called Nitrosomonas, which have been eliminated from our skin’s microbiota by modern soaps and detergents. They sell their products online. In an entertaining article by Julia Scott in the New York Times you can read about her testing the products for four weeks.

It looks like we are ready for a new approach to skin care in general, including new odor-reducing products and there are quite a few innovative companies looking at this. Who knows, in another 100 years we might all be spraying bacteria onto our armpits or be wearing garments that simply don’t smell.