“During my LSD sessions, I would learn a great deal” said Cary Grant about the 100 acid trips he dropped in the search of his true self. “And the result was a rebirth. I finally got where I wanted to go”.1 Steve Jobs described taking LSD as “a profound experience, one of the most important things in my life”.2 How is it that we never hear such grand endorsements about heroin, alcohol or cigarettes? What is it about psychedelics that has the power to change lives for the better? The answer might lie in the unique ways that psychedelics interact with the brain. In this post we’ll go deep on the molecular level—in a fun way. 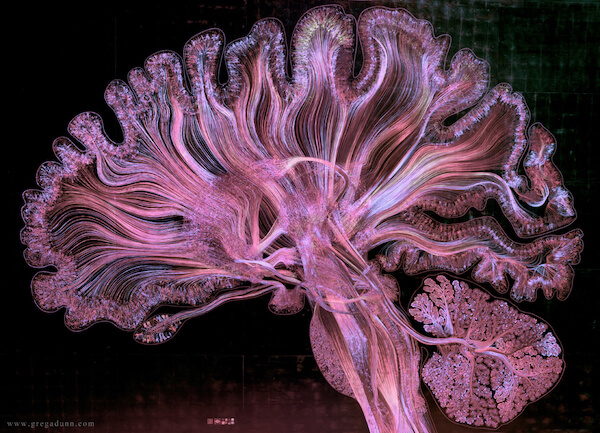 This and more stunning artwork is available on gregadunn.com

The experiences of Cary Grant and Steve Jobs are in no way isolated cases. In a recent experiment at Johns Hopkins University School of Medicine, 36 healthy volunteers were given a high dose of the hallucinogen psilocybin (the active ingredient in so-called ‘magic mushrooms’). Two thirds of participants rated it amongst “the five most meaningful and spiritually significant events of my life”. They reported increased well-being and positive behavior changes even 14 months after the psychedelic experience with no additional uses of the substance. 3 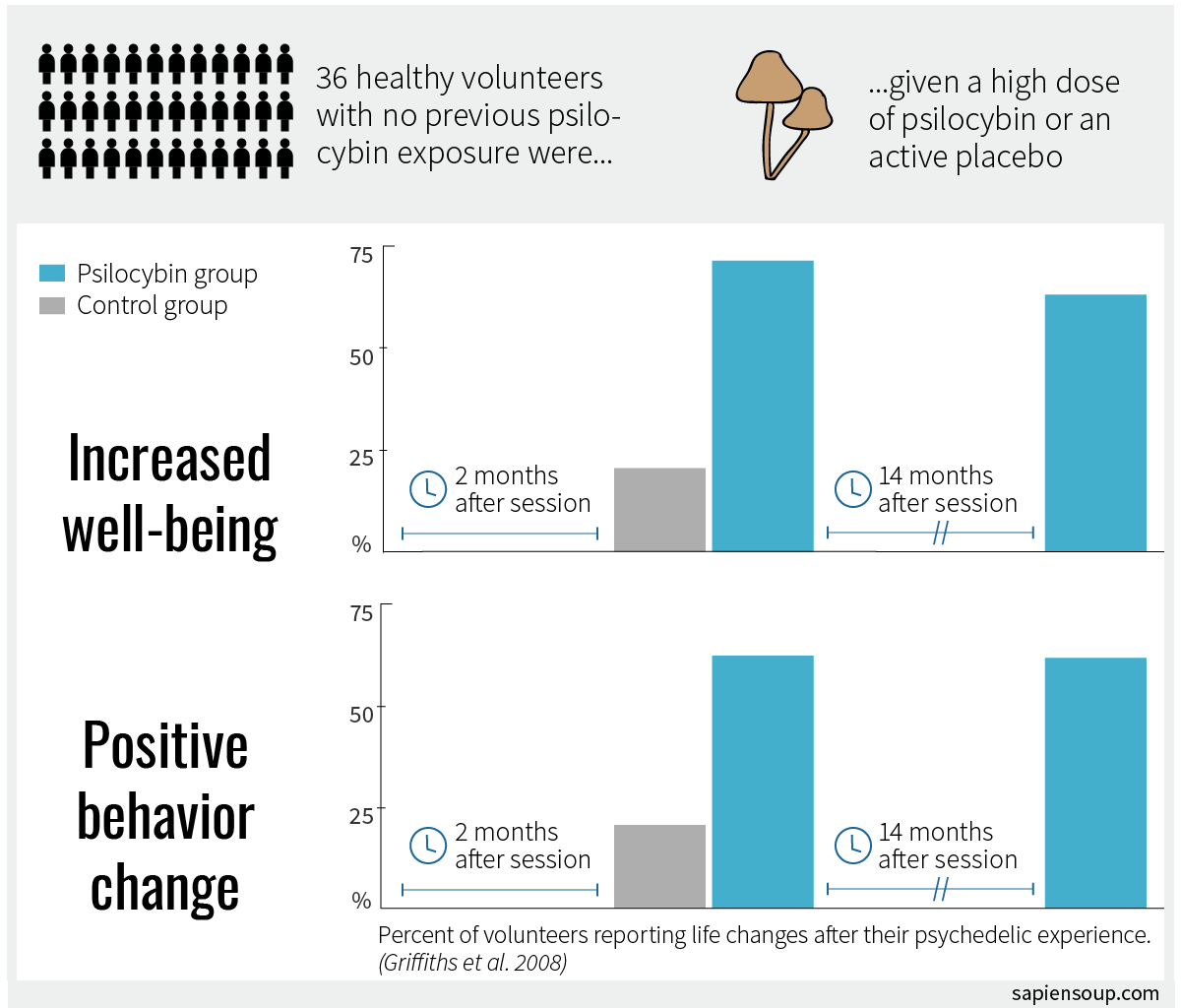 In this post, when I say ‘psychedelic drugs’ I’m referring to the classic psychedelics namely LSD, psilocybin, DMT, ayahuasca and peyote. Users of these drugs often report experiencing a ‘higher state of consciousness’ in which their perception seems enriched.

When researchers first scanned a human brain under the influence of these drugs, they expected to measure an increase in brain activity. To their surprise, most of the brain remained at the same level of activity except for a few areas. In those few areas the activity didn’t increase as expected, but rather decreased. What’s more, the participants experiencing the most intense psychedelic effects also showed the strongest decreases of activity in those particular areas. In other words, the lesser the activity, the stronger the trip.

Now, how does that make sense? Psychedelic drugs leave your brain’s executive functions intact: you can move, think, speak, know when to use the bathroom and other useful things. What they shut down however are certain connector hubs in the brain.

To understand the role of these connector hubs, think of traffic in a big city. When you shut down a major highway, drivers have to deviate from their normal routes and often find themselves in unfamiliar territory. Because a big city has an abundance of streets, drivers can still get to their destination, but only after a more lengthy and perhaps interesting ‘trip’. 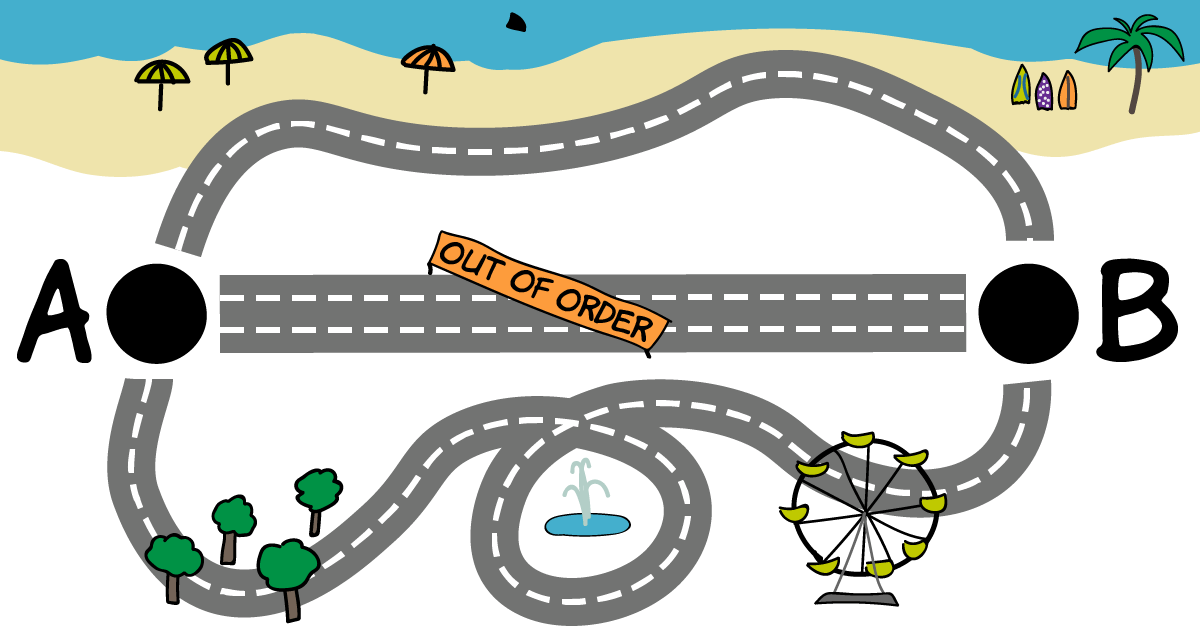 Something similar happens when psychedelics shut down certain connector hubs in the brain. All of a sudden, there is a lot more cross-talk between areas which usually wouldn’t communicate. 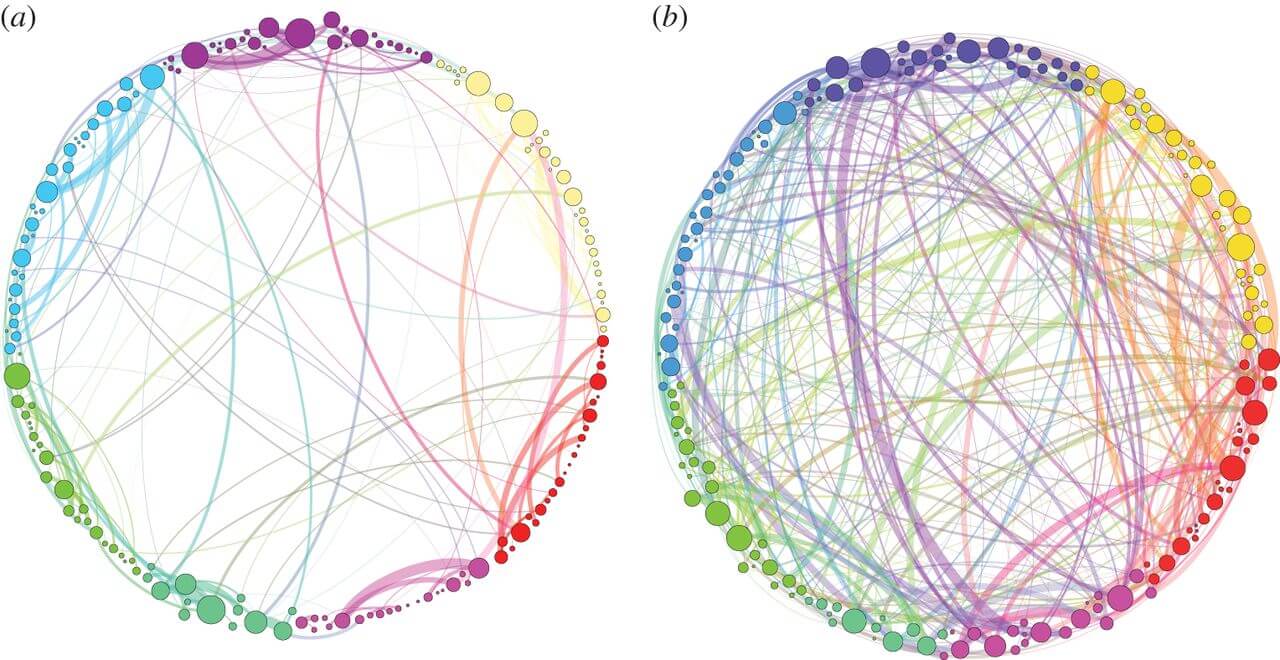 Communication pathways after (a) placebo and (b) psilocybin4

By this time, you may be asking yourself ‘What are these mysterious connector hubs and what do they do in the first place?’ The following section is all about these hubs and how they make up the so-called default mode network in your brain. This network is a relatively new discovery and turns out to play a key role in understanding the effects of psychedelics.

Whenever your mind is not engaged in a specific task, it switches into a kind of “autopilot” mode referred to as the default mode network or DMN for short. One way to think about the DMN is as an integration center, where information is collected and organized in ways that makes it coherent with regard to the rest of your cognition.5 The DMN is like a librarian who—when not handling immediate customer requests—indexes and categorizes books to keep the library neatly organized.

Another way to think about the DMN is as the center of the self. It’s engaged in self-reflection and metacognition, i.e. thinking about thinking. It allows you to mentally travel back and forth in time, pondering autobiographical events or future problems.6 7 8 9 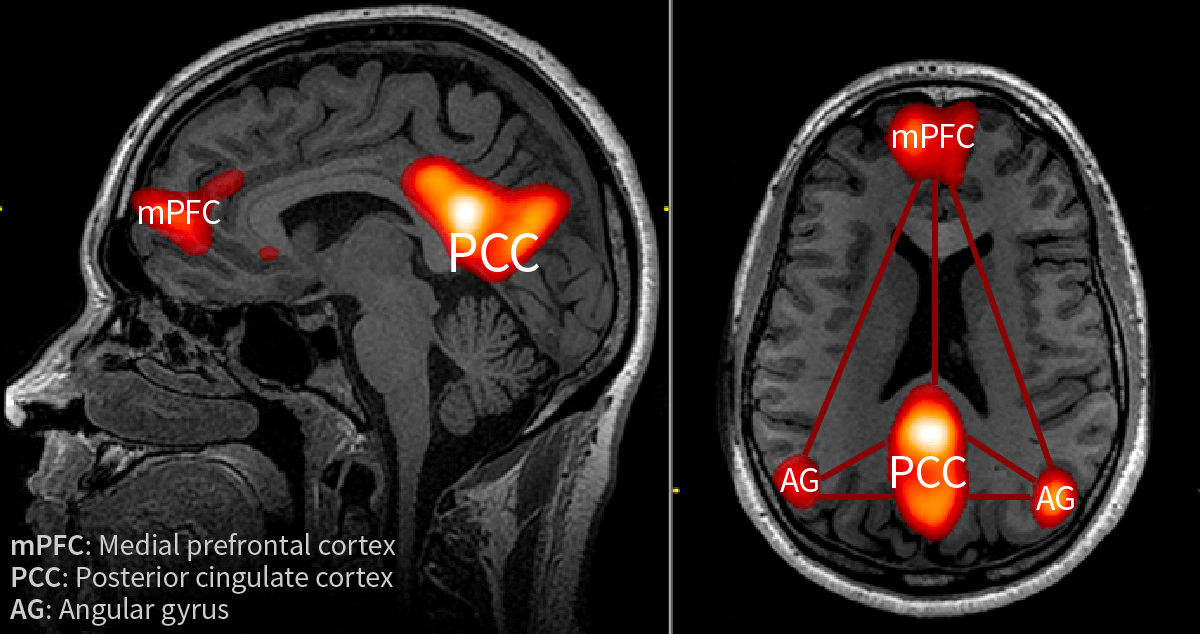 These important functions make the DMN a vital connector hub in the human brain and part of what distinguishes us from other species. However, an overactive DMN is associated with people being neurotic, depressed or anxious.

When psychedelic drugs shut off certain connector hubs, they also reduce the stability of the networks that exist on top of these hubs, in our case: the default mode network.11 So, if you were to disrupt your DMN—for example through the use of psychedelic drugs—how would it change the way you think and act?

When the usual DMN connectivity is not available and signals therefore travel on different routes, you experience reality in a different way. This is why the psychedelic state is often called an altered state of consciousness. ‘Seeing with your eyes shut’ and a disintegration of the self as you know it are two typical characteristics of such a state.11 To learn more, check out The Psychedelic Experience post with a side-by-side comparison of how different drugs change your perception.

Particularly in people suffering from mood disorders, psychedelics frequently show another interesting effect: their condition improves. Mental disorders such as depression, anxiety and obsessive compulsive disorders (OCD) are often associated with a hyperactive DMN.12 If you disrupt the DMN, you often see substantial and long-lasting reductions in symptoms. We’ll talk more about concrete study results in a follow-up article next week.

Psychedelics are unique in how they can modulate the DMN. How they work in the brain is endlessly fascinating—and unfortunately—pretty complicated. And yet, I’ll have a try in explaining it in simple terms:

Your brain on psychedelic drugs 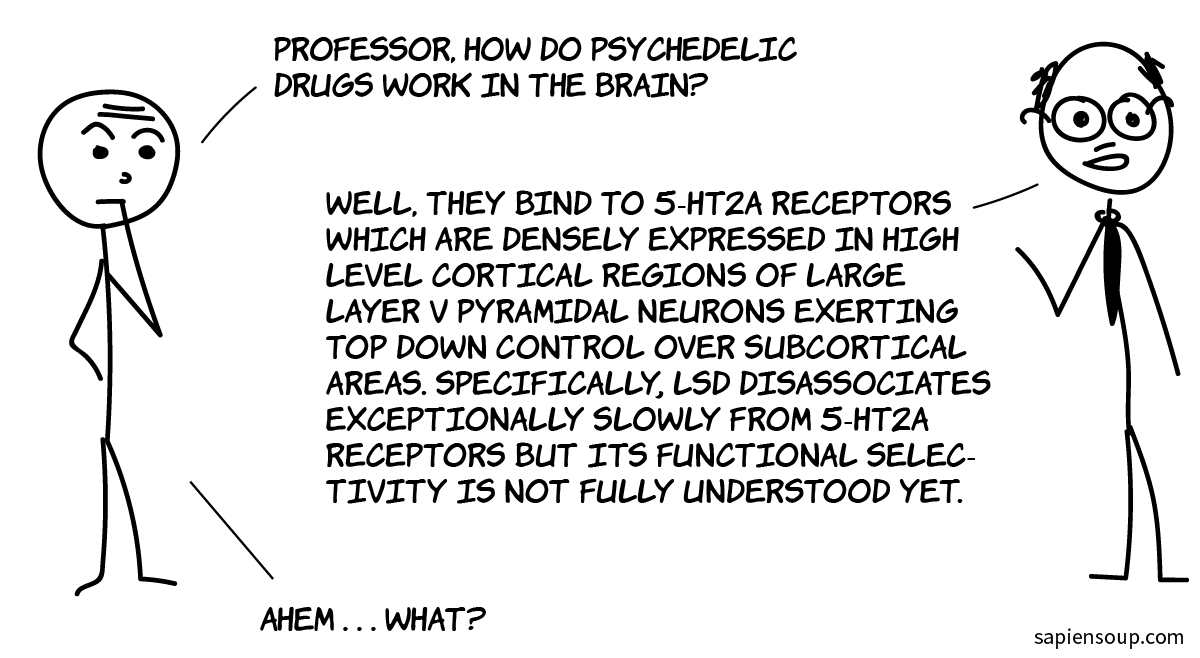 Right. Let’s break that down into normal language:

Psychedelics interact with the serotonergic system in the brain, meaning they can bind to serotonin receptors. Why? Because serotonin, LSD and psilocin—the psychoactive metabolite of psilocybin—look very similar on a molecular basis.

Serotonin 2A receptors sit on specific types of neurons which have long axons that span across the brain, as opposed to neurons with short axons that only connect to other cells in their close vicinity. These large neurons have axons that leave the cortex and run down into areas below the prefrontal cortex.13 Doing so, they have top-down control over the regions they connect to, and in this case it’s areas associated with emotions and stress responses.14

Neurons can be either excitatory or inhibitory. Think of training a dog.

Both, “speak” and “quiet” are signals that produce a certain reaction. An excitatory signal tells the neuron to “fire”, whereas an inhibitory signal says “don’t fire”. Remember, psychedelics stimulate serotonin 2A receptors, and those are located on excitatory neurons, meaning causing the neuron to fire. Logically, one would think that taking a psychedelic drug would lead to more firing in the brain. Paradoxically, the opposite is the case. How does that make sense?

When activation leads to inaction

LSD binds to the serotonin 2A receptor and causes the neuron to fire off an excitatory signal. When these neurons fire, they also stimulate nearby, inhibitory neurons called fast spiking interneurons, which have serotonin 2A receptors as well. So what happens is a massive firing and an even greater inhibition at the same time. Eventually, the inhibitory signaling is stronger than the excitatory and you’re left with a net decrease in activity.15

Just because serotonin and psychedelic drugs bind to the same serotonin 2A receptor doesn’t mean that they produce the same signal. For a long time, scientists believed that receptors worked like light switches, meaning that they are either on or off. According to this theory, psychedelics and serotonin must have had the exact same effect: either binding to the receptor and activating it, or clearing the receptor and deactivating it. But today we know that each molecule interacts with a receptor in its own unique way, causing a unique signal within the cell. How does that work? When a molecule binds to a receptor, the receptor has to physically accommodate the molecule’s unique shape. And by doing so it activates certain signaling pathways within the neuron.16 The jargon for this principle is functional selectivity, in case you wish to go deeper.

Ok, so an LSD molecule doesn’t actually look like a rainbow. Rather, it’s a big, rigid molecule which takes up a lot more space within the receptor than the smaller, more flexible serotonin molecule.17

And receptors don’t look like sticks but more like funny party streamers being tied together at the ends with a thin thread. So, when LSD binds to a receptor, it looks a little something like this:18

You can see how the party streamers give way to the big LSD molecule and thereby trigger a distinct signaling pathway within the cell. Tip: if you ever talk to a biochemist about this, don’t call it a party streamer—call it a helix.

As of today, it remains unknown which signaling pathway is most relevant for the psychedelic experience.17 What we do know is that it’s a different pathway than the one activated by serotonin.

Why an acid trip lasts so long

Serotonin molecules clear receptors a split second after binding to them. In contrast, when LSD binds to a receptor, the receptor collapses over the molecule and forms a lid, preventing the LSD from clearing.18

As long as the LSD molecule is trapped within the receptor, it causes the receptor to send off signals—for a few hours and sometimes longer. That’s why mere micrograms of LSD can make users ‘trip’ for 6-15 hours.19

You can probably see now that psychedelics work like no other molecule in the brain. Fossil evidence supports that humans have made use of psychoactive plants for as much as 10,000 years during ritual ceremonies.20 Ancient societies regarded psychedelic drugs as tools; will modern society adopt this perspective once again? Personally, I see a number of persuasive reasons why we should:

First, psychedelic drugs are remarkably safe. There is not one single documented case of an overdose from LSD or psilocybin in humans. What makes them unsafe is acquiring them from strangers on the street with no transparency regarding additives and purity.

Second, they don’t cause addiction. If a user were to take psychedelics with high frequency, they lose their effects. The body quickly builds up a tolerance which can’t be overcome by stronger doses. It takes a refractory period of at least a few days until the desired effect can be reproduced. In that way, it’s really a drug for ‘special occasions’.

Third, there is a ton of anecdotal evidence that psychedelics are useful tools for personal growth. And a growing body of scientific evidence supports that psychedelics may be extraordinarily effective in treating mood disorders and addiction.

In our next post we’ll talk more about psychedelics and mental disorders. You can sign up for our newsletter and get notified when we publish it.

If you are located in the Vienna area, we invite you to join the Psychedelic Society Vienna Meetup, where we’ll discuss the latest research and developments in the field.