Is ketamine going to be Psychedelic Therapy’s opening act? At medium to large doses, Ketamine evokes colorful visions and mystical type experiences that have been linked to positive treatment outcomes. And—unlike other psychedelics—Ketamine has been readily available at clinics worldwide for 50 years. 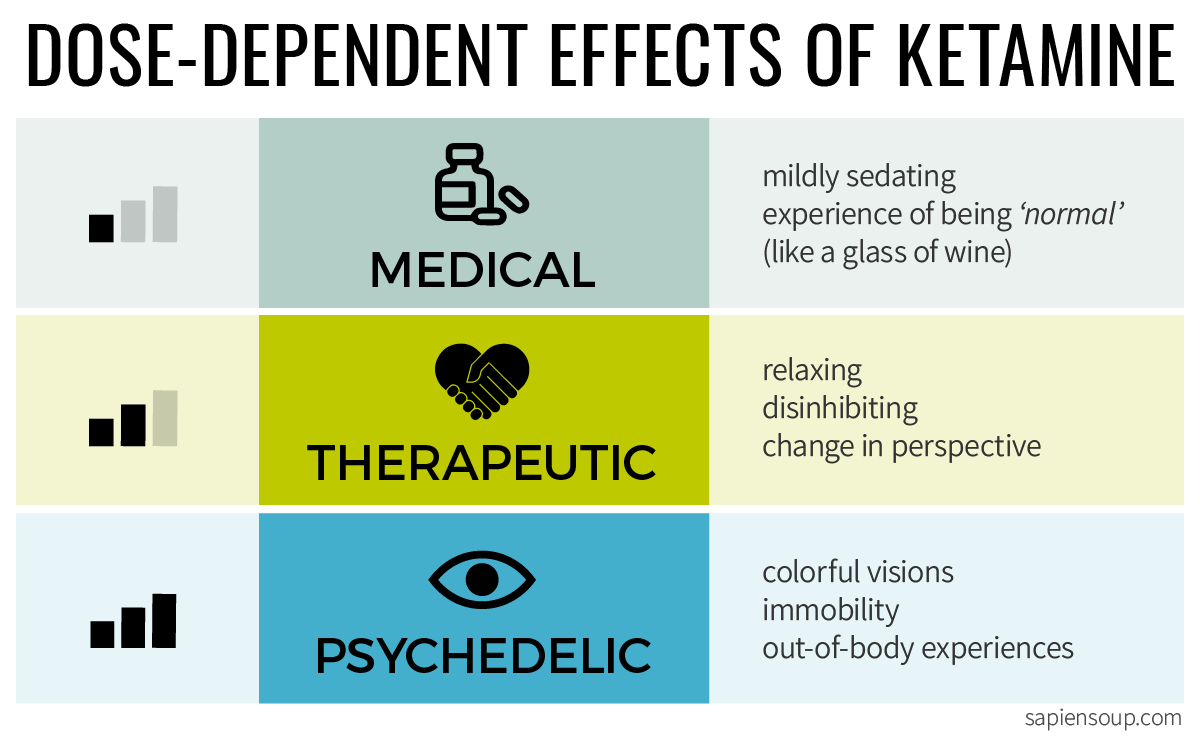 Psilocybin and MDMA have gotten much attention for their potential efficacy in treating some of the most prevalent psychiatric conditions of our time, such as depression, trauma and anxiety disorders. Phase-3-studies are well underway, effect sizes look promising and therapists around the globe are being trained to bring this new and potentially groundbreaking treatment to the masses. However, clinical approval of psilocybin and MDMA might still be a long way ahead of us. In the meantime, some within the psychedelic community are looking to see whether ketamine may be able to fill the gap.

Ketamine is a so-called dissociative anesthetic. Like all good anesthetics, it ensures patients have no body movements, no pain and no memory. What’s more, Ketamine has two important advantages over other anesthetics. First, it doesn’t cause significant drops in blood pressure. And second, it doesn’t cause respiratory depression. These additional features made ketamine the anesthetic of choice for operating under suboptimal conditions, like in the Vietnam War where anesthesiologists, who must monitor vital signs and adjust dosage to keep patients from dying, were rare in the field.

However, despite its advantages, clinicians have taken a step back from using ketamine as anesthetic due to its peculiar side effects. Namely, patients have reported bizarre visions and out-of-body experiences on coming out of their anesthesia. Hence the name dissociative anesthetic. These psychoactive properties of ketamine were considered undesirable and as a result, ketamine is used only infrequently as an anesthetic today.

From anesthesia to psychiatry

Starting around the year 2000, ketamine has had a revival in the field of psychiatry. It turns out that, in lower doses, ketamine has distinct antidepressant effects. Ever since, psychiatrists have administered ketamine to patients who suffered from severe depression. The clinical use confirmed what studies had previously shown: for many patients, ketamine could immediately relieve symptoms of depression—even with just one dose. This extremely fast onset closed an important gap in the clinical treatment of depression, because modern antidepressants like SSRIs and SNRIs take about two weeks to come into full effect. Acutely suicidal patients can’t wait that long, thus ketamine has gained popularity again, now as a so-called rapid-acting antidepressant.

Why hasn’t my doctor suggested ketamine to me?

Let’s discuss why ketamine is not without controversy.

About 60-70% of depressed patients respond to ketamine.1 2 3 4 5 This is a great result, considering that these patients suffer from a treatment resistant form of depression, meaning that at least two prior treatments have failed. Unfortunately, these effects are short lived. About one week after a single administration of ketamine, the symptoms usually kick back in. 1 2 3 4 5

In clinical practice, patients are started off with a flight of ketamine to lift them out of their depression. At the same time, they are shifted from their old SSRI to a new SSRI. The rationale is that it’s the SSRI that does the long-term stabilization and ketamine is only an add-on to that therapy. Patients who respond to the initial ketamine flight but then relapse may receive a weekly dose of ketamine as maintenance therapy.

This is where it gets complicated: Ketamine is approved as anesthetic, but not as an antidepressant. And yet, it’s possible within medical practice to use pharmaceutical drugs for unapproved indications if there is no other treatment available. This is known as off-label use. Ketamine has widely been used off-label in treating treatment-resistant depression. But in order to be formally approved as an indicated treatment it takes a long, complicated and expensive procedure, which typically only pharmaceutical companies can afford. After 20 years of off-label use, the pharma company Johnson & Johnson changed the game. In 2019 they attained FDA approval for a variant of ketamine—Esketamine—which they patented and sell today as a nasal spray called Spravato. Now that there is an approved treatment available, doctors are compelled to use the proprietary nasal spray over regular ketamine. The catch: a single dose of Spravato is priced in the high 3-digits, whereas a dose of regular ketamine costs less than a cup of coffee.

Ketamine is a derivative of PCP which some readers may know of as the street drug called Angel Dust. Chemical compounds escaping the lab and being used recreationally is a common theme throughout the history of pharmaceutical drug development. Heroine, cocaine, LSD and various types of methamphetamines were originally developed in pharmaceutical labs for therapeutic purposes. It is because they were so effective that they leaked into the party scene. By their nature, all psychoactive substances that are “fun” will be used recreationally and the same has been true for ketamine. Outside the lab ketamine is sold as Special-K or Vitamin-K in the form of a snortable powder. Ketamine has detrimental side effects if used frequently, it can lead to addiction and—under unfavorable und unsupervised circumstances—can be lethal. More on that later.

Thus, ketamine is not designed for home use, but rather being administered at clinics and by trained medical staff.

What makes ketamine effective? The short answer is: we don’t know for sure. Amongst clinicians, researchers and practitioners we currently find three different hypotheses which—in turn—result in three different treatment models that will be laid out in this section. What’s effective is 1) the pharmaceutical substance, versus 2) the combination with psychotherapy, versus 3) the visions themselves.

Let’s explore what’s behind these three hypotheses and who provides the treatment that comes with them. 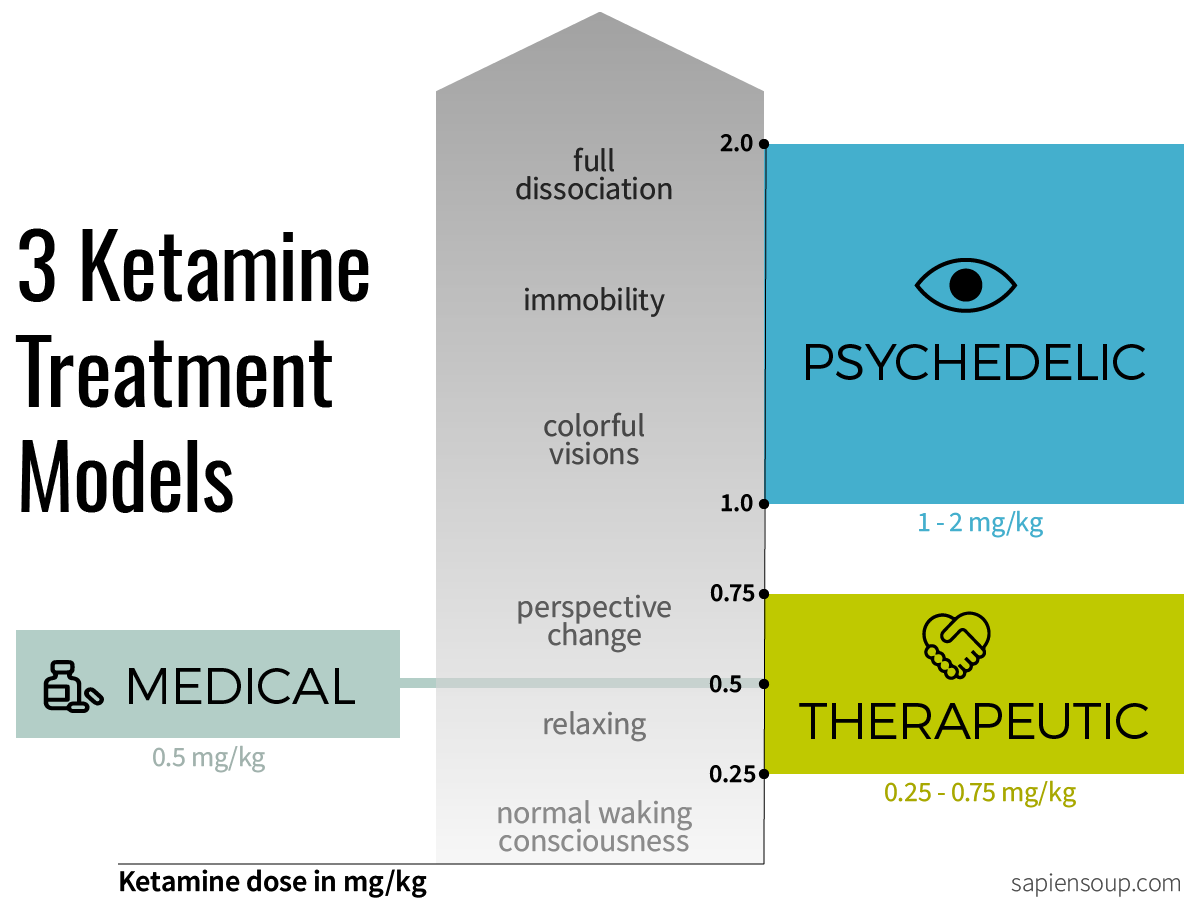 The medical model operates with small doses, no visions and higher frequency. With low dosages, psychoactive effects can be kept at bay. On the other hand, low doses need to be administered more often in order to achieve a cumulative effect. As mentioned above, ketamine is used as an add-on treatment to conventional antidepressants. The medical model is the status quo in most larger clinics around the world.

Recently however, a new perspective has emerged amongst experts in the field: what if the psychoactive properties aren’t merely an irritating side effect, but are actually responsible for the efficacy of ketamine?

The idea of the therapeutic approach is to use the psychoactive properties of ketamine as lubrication for talk therapy. In other words, to help patients relax and talk about things that are too painful to talk about otherwise. During this approach, patients are fully conscious but feel a bit more disinhibited, which makes it easier for them to open up. 7 This approach has been named Ketamine-Assisted Psychotherapy (KAP) and is offered by smaller treatment centers and individual health care providers.

In the psychedelic model, the patient is lying down and fully giving in to the psychedelic experience which can involve colorful dream-like visions, meaningful insights and full dissociation which manifests as out-of-body experiences. This is the state that recreational users refer to as being in a k-hole. Psilocybin and LSD Studies from the 1960s until today have shown a correlation between such mystical-type experiences and positive treatment outcomes.8 It stands to reason that the same principle could apply to ketamine as well, thus the psychedelic model. But little data has been gathered to confirm this assumption.

Typically it’s the same providers that offer the therapeutic model, that would also offer the psychedelic model. It’s widely agreed however, that this high-dose approach is not appropriate for many patients. 7

In our next story we will take a peek inside some of the clinics that offer therapeutic and psychedelic treatment models. Sign up for our mailing list to be notified when the story drops.