This post presents a summary of scientific research on the human metabolism of THC—visualized and explained in simple language.

Originally, my goal was to write on the effect of cannabis in breast milk (update: which I now did) but as I got deeper into the subject matter I became fascinated with the metabolic pathway of THC and what that means for its psychological effect. I learned why—also on a molecular level—cannabis turns into a different kind of drug when it is eaten vs. smoked, why it has such a long half-life in the body and how inhalation technique greatly impacts bioavailability. I spent two months reading my way through scientific papers not freely available to the public, analyzing original data and making sense of it all. The majority of sources for this post are from scientific journals and occasionally from Wikipedia for definition purposes.

I was surprised that I couldn’t find any infographics on the subject. So after collecting all this data, I decided to create an infographic myself that sums up the human metabolism of THC. Enjoy and feel free to share it. I encourage you however, to read the post as well, since it contains additional information that goes beyond the infographic.

To understand the pathway of THC in the human body, you must first understand what THC does when it hits your body. You might find the biochemistry part at the beginning challenging. I certainly did when I started applying myself to the topic. Believe me, it’s worth it—I promise the reading gets easier and incredibly interesting further on.

A bit of biochemistry

You’ll find different versions of naming those molecules across the internet. If you end up as confused as I was, check the following table for clarification:

Again, in the liver, delta-9-THC turns into 11-OH-THC which turns into 11-COOH-THC. You’ll need to remember this as I will now explain how THC travels through the human body.

Note: The three THC molecules have different properties. For the sake of clarity I’ll call them by their full names—delta-9-THC, 11-OH-THC, 11-COOH-THC—unless I mean THC in general.

Whether one inhales or ingests cannabis makes a big difference in terms of the metabolic pathway that THC takes through the body. And as we will see in the sections to follow, that pathway will impact the efficacy of THC.

When cannabis is smoked or vaporized, delta-9-THC enters the bloodstream via absorption through the lungs. Once in the bloodstream, the delta-9-THC travels straight to the heart, and the heart then pumps it through the entire body—including the brain—allowing it to bind to cannabinoid receptors. The psychologically experienced high kicks in as the THC molecules pass the blood-brain barrier and bind to receptors in the brain.

There are two kinds of cannabinoid receptors:

The biological pathway through the lungs typically results in a steep increase of delta-9-THC in the bloodstream within 10 minutes of consumption. 11-OH-THC peaks slightly later, at around 15 minutes. After that, levels of both psychoactive molecules decrease sharply until, after 12 hours, their concentration falls under the detectable limit of 0.5 ng/ml. The second and non-psychoactive metabolite 11-COOH-THC peaks more than one hour after consumption and circulates in the bloodstream for a long time. In the quoted study it took 168 hours, i.e. 7 days, to fall under the detectable limit.2

When ingested, delta-9-THC enters the bloodstream through the walls of the stomach and intestines. Tests with radiolabeled delta-9-THC molecules show this process to be highly effective, with 90-95% of delta-9-THC molecules being absorbed, depending on the carrier medium.3 When absorbed gastrointestinally, delta-9-THC travels first to the liver where most of it is eliminated or metabolized before it has ever had a chance to activate a receptor. After this first pass through the liver, the remaining delta-9-THC and both its metabolites get to the heart and from there into circulation. Delta-9-THC and 11-OH-THC reach the brain simultaneously.

How much of the consumed THC actually makes it into the bloodstream? There is no easy answer. The fact is that bioavailability fluctuates wildly.

In an experiment, six test subjects smoked the exact same amount of delta-9-THC. Test subject Mr. Burns exhibited almost three times as much delta-9-THC in his bloodstream compared to Homer who showed the lowest concentration. For all test subjects the peak was within 6 to 10 minutes after inhalation.2

Across all users, light and heavy, the bioavailability for inhaled delta-9-THC is between 10-35%.3

For ingested delta-9-THC, bioavailability is only between 4-12%. In contrast to inhalation, the user has little influence on the degree of bioavailability, with the exception of choosing a more optimal carrier medium. In many studies the choice was sesame oil or a similar high-fat carrier. After oral use, high variability was observed not only in the absolute levels of THC but also in the timing when users show peak concentration. Concretely, person A can exhibit peak concentration after one hour of ingestion whereas person B can exhibit peak concentration after six hours. Multiple peaks have been reported as well.3

The following chart compares the delta-9-THC exposure of three different methods of intake: inhalation, ingestion and injection. In practice, delta-9-THC is usually not injected, but was done so in this study as a control for determining the bioavailability of different routes. The same study suggests a mean bioavailability of 18% for inhalation and 6% for ingestion.6

Looking at this chart I was tempted to conclude that inhalation produces a stronger psychoactive effect than ingestion but there are a number of problems with this assumption.

Second—and more importantly—THC blood levels are a terrible indicator for the magnitude of a psychological high.

THC blood levels are a terrible indicator for the magnitude of a psychological high.

Blood transports the THC but it’s the destination that matters: 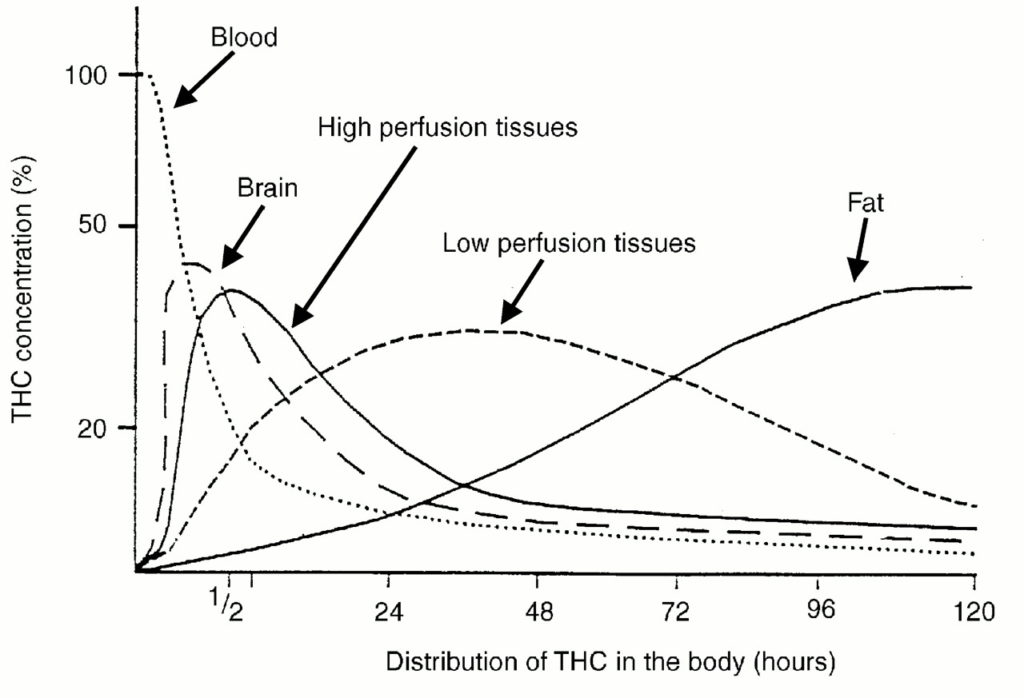 As you can see in the chart above,7 after smoking THC there is a time lag between concentrations in the blood and brain. That’s why high THC levels in the bloodstream don’t mean that the user experiences a psychological high at the same time.

Finally, THC is not just THC. Some studies suggest, that the psychological high correlates better with the blood levels of the metabolite 11-OH-THC whose absolute representation would be much lower than the one of delta-9-THC.8 More on this in the next and final sections.

Just around the time when THC concentration is at a high point in the brain, psychoactive effects start to manifest. In the study described below, users were asked to rate the intensity of their experience over time on a scale from 1 to 10 in both inhalation and ingestion scenarios.

In the “smoking” chart below, you see the typical spike of delta-9-THC levels at the beginning, followed by 11-OH-THC peaking a few minutes later (the study at hand does not display 11-OH-THC levels). The subjectively rated effect achieves the highest level around 10 minutes after the delta-9-THC peak.9

The second tab above shows the same data for ingestion of 20 milligrams of delta-9-THC. Note that the time axis contains different values. Gastrointestinal absorption happens more slowly and usually results in a continuous rise and fall of blood levels and psychological high. Keep in mind that the values represent only averages. While person A experiences a “3”, person B might experience a “9”. Therefore the chart has to be taken with a grain of salt.

Comparing the psychological high over a timescale from 15 minutes to 360 minutes (i.e. 6 hours) reveals the potency of delta-9-THC via the pathway through the stomach.

The study at hand shows comparably small psychological effects for oral consumption. I’ve seen a second dataset which documented a much stronger psychological high which lasted almost twice as long as in the above study (with the same dose).8 9

Many users claim that edibles produce a stronger and more “psychedelic” effect when compared to smoking. Unfortunately, there aren’t many studies that have assessed the quality of psychological effects across different methods of intake. Based on the data I’ve found, I can neither support nor dismiss such a claim.

An insight the data does provide, however, is that the ratio of delta-9-THC to 11-OH-THC impacts the intensity of the psychological high. And this ratio depends directly on the method of intake.

The ‘first-pass effect’ through the liver drastically changes the ratio of the two psychoactive cannabinoids.

Altogether, this means that the lower bioavailability of delta-9-THC when ingested seems to get balanced out by the larger occurrence of 11-OH-THC and its higher potency in the brain.

The conclusion is that 11-OH-THC gets you a ‘better bind for the buck’.

I don’t want to get caught up in a discussion about drugs being good or bad. I respect individuals making decisions about how they want to think, feel and live. And as long as they don’t hurt anybody else, I think people should be free to use drugs—legal or illegal—as tools to attain their desired state of consciousness.

Having said that, it’s also a fact that drugs have desired effects and undesired side effects. And for the sake of maintaining good health over a lifetime, minimizing exposure to drugs is worth striving for.

Ergo, if I had the opportunity to enjoy the well-documented benefits of cannabis at a fraction of the associated exposure, that’s hitting a sweet spot. Especially for folks who are interested in achieving mild, enduring effects which blend in smoothly with their everyday lives.

Lightly-dosed edibles may be a ‘sweet spot’ for health-conscious folks looking for mild and enduring effects at low levels of exposure.

Coming up with the right minimum effective dose (MED) is a matter of trial and error. Bioavailability fluctuates wildly across individuals and gender. The enzymes in the liver of a man and a woman work differently, which leads to a lower rate of blood plasma clearing in women,10 something to take into account too.

So, where to start? Some edibles sold in US states, which have legalized marijuana, contain astronomical doses of 100 milligrams and more. I haven’t encountered studies with oral doses of less than 20 milligrams, but 20 milligrams resulted in a medium to strong effect across the board which makes me believe the MED is significantly lower than that. The US state Colorado mandates a restriction of 10 milligrams of THC per edible, which is also the state’s recommended dose per “serving”. If one THC infused gummy bear contained 10 milligrams of THC, I’d consider just eating the feet.11

Another—quite useful—lesson I learned researching the metabolism of delta-9-THC is about dealing with smoker’s paranoia. Most of us have been there: you, a friend, a first timer, an excessive dose or simply a bad day. Happens to the best. Next time I see somebody freaking out I’ll say something along the lines of “Yes, you’re super baked. That’s because you have peak THC concentration in your brain right now. Hang in there buddy, science taught us the peak doesn’t last very long. In just a few minutes it’ll be a smooth ride down the other end.”