Breastfeeding women have been strongly discouraged from consuming marijuana. This recommendation was primarily based on precaution, rather than data. Now, in April 2018, a new study has been released that provides the most concrete data on THC and breastfeeding in the history of cannabis research. As it turns out, only very small amounts of THC transfer into mothers’ breast milk. 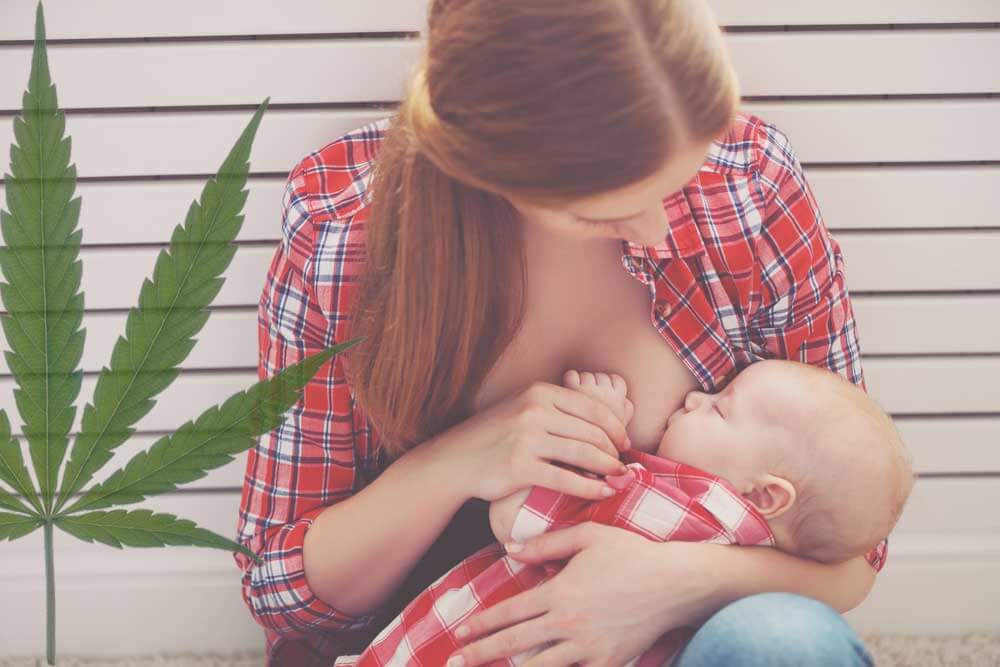 The researchers Dr. Teresa Baker and Dr. Thomas Hale collected and analyzed breast milk samples of Colorado mothers in 2017. The results were published in the scientific journal Obstetrics & Gynecology on April 6th of 2018.

Here is the rough outline of how the study was conducted:

Unfortunately, the original publication is behind a paywall. But here are the two key takeaways from it, put in perspective with what we’ve learned from cannabis research since the 1970s:

The baby gets on average 2.5% of the maternal THC dose through the breast milk.1 Only 2.5%—that’s very little. And yet, it’s an apples to oranges comparison if what you really want to know is “How much THC gets into the baby’s system?”. That number would be even lower than 2.5%, and here is why: the mother inhales whereas the baby ingests. This distinction matters, because different consumption modes are associated with different bioavailability rates. And bioavailability rates tell us how much of the consumed substance actually gets absorbed by the body. With inhaled marijuana, the bioavailability is somewhere between 10-35%2. When marijuana is ingested, however, the bioavailability drops to 4-12% because of the first pass effect through the liver.2 Check out my previous post on The Human Metabolism of THC to learn what exactly causes the lower bioavailability and how THC turns into a different drug when it’s ingested.

This means that the estimated dose for the baby—2.5% of whatever the mother had—is further reduced by the lower bioavailability of THC following ingestion.

2. THC concentration falls off after one hour

The highest concentration of THC in breastmilk occured one hour after cannabis consumption. Below, you can see the amounts of THC in all the analyzed breast milk samples from the present study on a timescale from zero to four hours. 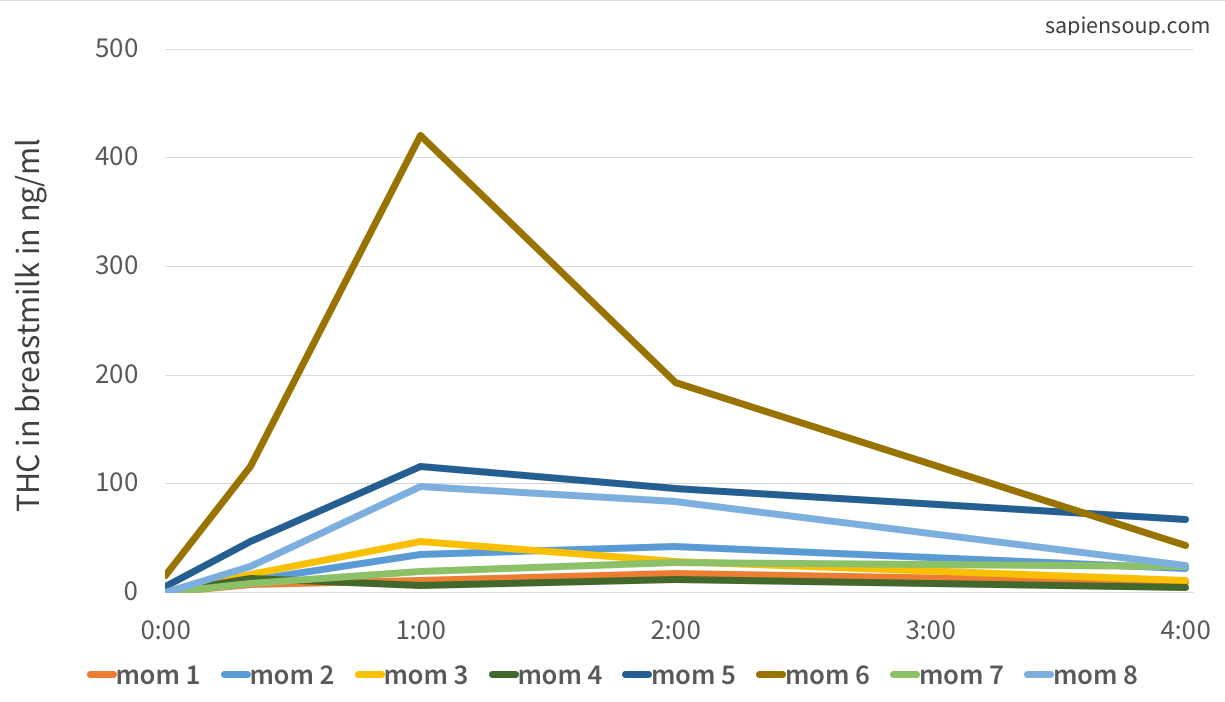 The mean peak concentration was 94 nanograms of THC per milliliter of breast milk (ng/ml) after one hour. Mom number 6 is an outlier with peak values beyond 400 ng/ml which looks dramatic. And yet, regardless of how high the peak THC concentration of each and every mother was, after 4 hours the THC amounts have returned to low levels around 26 ng/ml—even in outlier mom number 6.

How to apply these findings

Okay so what are the practical takeaways for mothers who’d like to make an educated decision about cannabis consumption while nursing? The answer—a stopwatch may be your best friend.

Babies have feeding and sleeping rhythms that mothers usually know by heart and they could time their cannabis consumption accordingly. If, for example, a baby drinks at 8pm the last time before it goes down for the night, the mother could consume directly after feeding. In that way, the baby wouldn’t be drinking while the THC concentration is at its peak. If the next feed takes place four hours after the cannabis consumption, baby’s exposure to THC would be rather low. Older babies can even go for 6 to 8 hours without feeding at night. At that point, it’s likely that the milk would contain only residual amounts—if any. 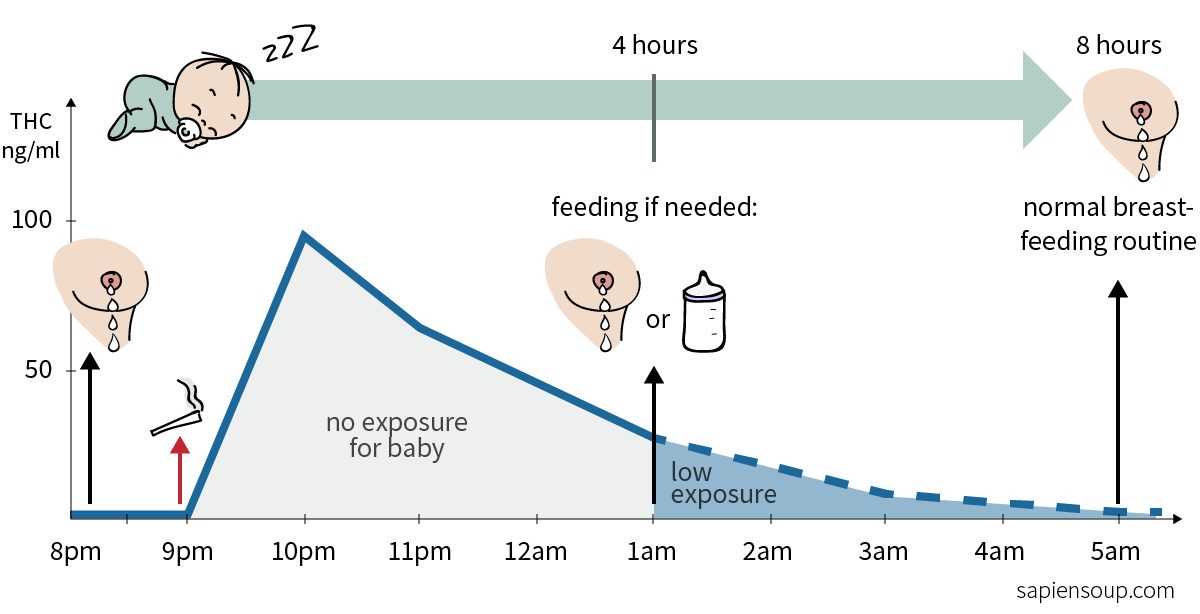 Example of feeding schedule (underlying data from Baker1, dotted line is my own projection)

The present study tracked THC concentrations over a timeframe of four hours only. Another study is currently in the making that explores a timeframe of 36 hours. Until we have that data, the dotted line in the chart above remains my educated guess.

One could further minimize THC exposure by feeding pumped breast milk at the first feeding session after cannabis consumption. In that way, the timespan of non-exposure can be stretched out another 3-4 hours, to a point when THC concentration is minimal and at a 2.5% transfer rate, possibly even non-existent.

You may want to choose a strain of marijuana that has a higher amount of cannabidiol (CBD). CBD is a natural compound in the cannabis plant that has antibacterial, anti-inflammatory, anti-anxiety and neuroprotective properties.3 Some of the unwanted side-effects of THC—such as alterations in functional brain networks—can be significantly reduced through CBD.4 Although CBD doesn’t act on brain-receptors like THC does, it still helps to relax and to relieve anxiety. Hence, going for a well-balanced THC-to-CBD strain, rather than a high-THC strain with low CBD, could help reduce the total THC exposure for the mother and thus, for the baby.

Another strategy to lower total THC exposure is to choose edibles over inhaling. The chart below compares the total THC exposure between smoking vs. ingesting cannabis. Edibles will produce a decent psychological high (brown) but at considerably lower overall THC levels (green).5

Note that the psychological high may differ slightly when using edibles. On the one hand it lasts much longer compared to inhaled cannabis. One the other hand people have reported that they experience a different type of ‘high’. For both reasons, it’s strongly suggested to start with very small amounts and have a trusted friend, babysitter or family member on call who can come and help mother and baby if things go sideways.

Remember from our first post on Cannabis and Breastfeeding, how the default statement on the internet is “There is eight times more THC in breast milk than in blood serum”? (Seen here, here, here) What no one mentions however, is that this number is based on one single sample from a heavy-using mother who smoked 7 pipes a day6—maybe not the most representative case for new mothers out there. Thanks to the new data we can now lay this controversy to rest. The 8:1-myth is a great tool for scaring breastfeeding women away from cannabis use, when in fact it’s little more than an arbitrary number. It has as much explanatory power as a single temperature measurement is capable of predicting the seasons.

Let me showcase to you why this is. The following chart compares the THC levels in blood serum with the ones in breast milk. Note that the THC dosages aren’t identical. The blood levels were measured in participants who smoked 33.80 milligrams of THC whereas the mothers smoked 23.18 mg of THC. Thus it’s not a perfect comparison, but it’s good enough to convey the point—because after one hour, most of the smoked THC is eliminated from the blood anyway, regardless of how much the initial dose was. Take a look at the THC ratio in milk (green) compared to blood (blue): 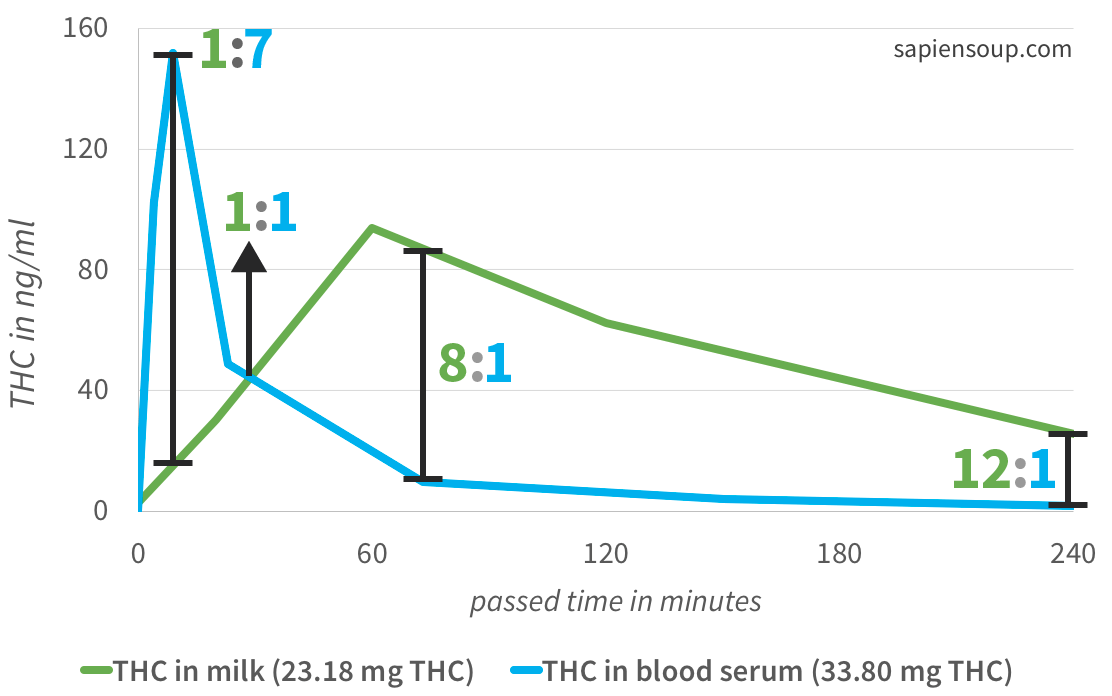 Comparison of mean THC levels in breast milk1 and blood7

A little past the first 60 minutes you can see that the ratio between milk and blood in fact is 8:1, meaning there is 8 times as much THC in breast milk than in blood. Rewind 45 minutes, however, and the ratio is 1:1 with the levels in milk and blood being equal. And if you measured the levels at 10 minutes after consumption, you’d find out that the ratio is 1:7, meaning that milk contains only 1/7th of the THC that is found in blood serum.

Quoting a milk-to-blood ratio without giving proper context about the timeline and absolute THC levels is misleading. Compare, for example, the ratios at the 30 minute and 240 minute (4 hour) marks. A ratio of 1:1 sounds less worrisome than 12:1, doesn’t it? Consider, however, that the absolute THC levels at the time of the 12:1 ratio are lower than at the 1:1 ratio. This is how deceptive these numbers can be without the correct context.

In a nutshell, looking at ratio alone is pointless, because

My take on mothers who use cannabis

I neither condone nor condemn the use of cannabis while breastfeeding. Above all, I believe we should have more compassion with new mothers. Raising children is hard and the first months and years can be especially challenging. When I had my first child, I remember multiple occasions of me secretly wishing for a joint to help me be more relaxed throughout these exhausting times. On top of that, I’ve come to appreciate cannabis as a catalyst for creativity and lateral, outside-the-box thinking. It has most definitely increased the quality of my work.

Mothers should be trusted to make reasonable risk-benefit assessments, since they are the experts for their unique life situation. If they feel that a joint from time to time can meaningfully improve their life quality, I’ll respect that. If they feel that they can be better, calmer and happier mothers by occasionally allowing themselves to use cannabis, I’ll respect that too.

After all, not using cannabis has consequences as well. When the body is stressed, it produces the stress hormone cortisol. Cortisol will temporarily raise energy levels to allow you to deal with the stressor, but chronically elevated cortisol levels have been shown to damage brain cells in the hippocampus and cause premature brain aging.8 Stressed mothers not only tend to lash out at their kids more often—what are the long-term effects of that?—but also transfer cortisol through the breast milk. In that way, maternal stress also poses a risk to the baby.

I breastfed my first child for almost two years, which is known to be extremely beneficial for a baby’s overall health, immune system and brain development. In contrast, detrimental effects though THC in breast milk are disputed and poorly-researched. Some studies find such effects, others don’t. 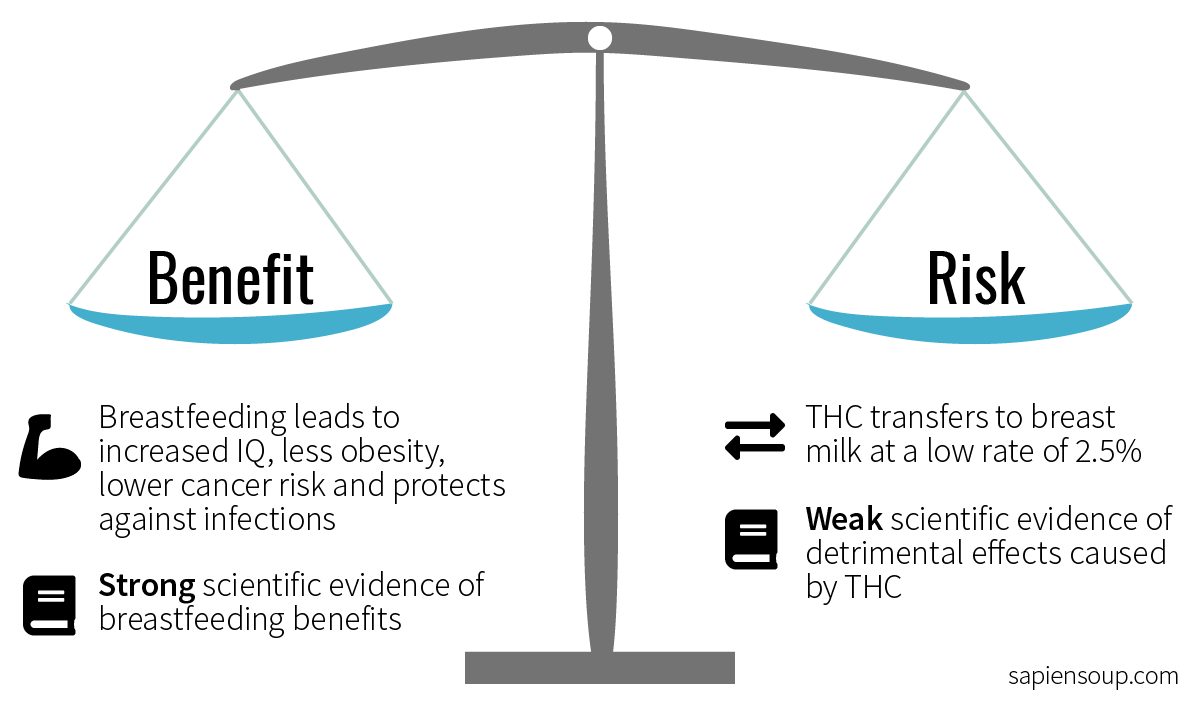 I believe that two years of mommy’s super-juice will outweigh the occasional joint. Especially, if a mother further mitigated (hypothetical) risks by following smartly timed feeding sessions to absolutely minimize the already low 2.5% transfer rate. Besides, I think it’s exactly this kind of weighing out risks and benefits that qualifies a mother as being responsible. But acting responsibly is only possible if we provide mothers with proper data so that they can make an informed decision in the first place.

Simply saying “Don’t use cannabis while breastfeeding” ignores the fact that 10% of Americans are using cannabis regularly4 and that some portion of these 10% are breastfeeding mothers. They are already using. For this reason and those above I’d rather give suggestions how to mitigate risks and support them in making smart choices.